The PJ Masks, Romeo, being defeated, Catboy and Owlette's distrust (when asking for help), losing her luna crystal, losing her moths, her moths staring at the lights, The Wolfy Kids, someone messing with Motsuki, Motsuki stealing her Luna magnet, Motsuki’s annoyance, Sticky Splats, someone stealing her magnet

Moths
Luna Girl (also called Luna for short) is the secondary antagonist (sometimes an anti-hero) from the Disney Junior show PJ Masks. She is one of the nighttime villains. She is always followed by moths, known as Luna Moths, throughout the show.

Luna Girl wants all the daytime things for herself and she'll have a terrible tantrum if she doesn't get her way! With the moths by her side, she takes to the skies on her Luna Board on a mission to retrieve all those fun day time fun things to do and to play with hoping the PJ Masks will just let her get on with it - but not so likely! She's heard shouting in frustration as she disappears above the rooftops.

Luna Girl is often portrayed as a greedy kind of person. She is often inconsiderate of what she steals and is boastful about what she is able to take as her own. Luna Girl can, however, be helpful and can be considered a good ally, depending on the situation.

Luna Girl appears as a young girl with short and shaggy silvery hair that has a darker color at the tips. She has dark blue eyes, fair skin, and slightly rosy cheeks. She wears a black coat-like top that has a lunar eclipse, gray sleeves and pants, and black boots. 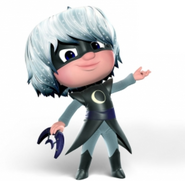