Duckburg
Lyla Lay is a recurring character from the PKNA comic series. She was also featured in Pikappa and PKNE.

Lyla is a journalist of Channel 00, but that job is just a front. Actually, Lyla is an agent of the Time Police, an organization from the future with agents in several key periods to avert history from being manipulated by time travelers.

Origins of Lyla differ with each new retelling of the Duck Avenger story.

In PKNA, Lyla first met The Duck Avenger during a soap opera party where she and Angus Fangus were invited as reporters. The Duck Avenger saved all the guests from an attack by the Evronians.

The Duck Avenger found out the truth about Lyla, including the fact that she knew he was Donald, when Lyla helped him fight against the Raider. After stopping the Raider, Lyla also revealed to the Duck Avenger that she really is an android.

In Pikappa, Lyla is the web-reporter of 00-channel.com, and met Duck Avenger during the Toyland incident, where she immediately saves him from being squished by a mechanical T-Rex, inadvertently breaking her own arm. Donald, puzzled by revelation that his favorite web-journalist is actually an android, takes her for repairs to his HQ.

While in transfer, Lyla told her story: Lyonard D'Aq, while investigating his own factory, found her disabled in a pile of rubble, and repaired her as far as his abilities could do, educated her and released her; though her mnemonic files largely remained damaged. Later Lyla found work as a web-reporter.

Lyla in her Time Police armor 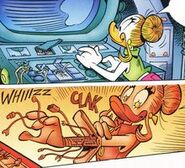 Retrieved from "https://disney.fandom.com/wiki/Lyla_Lay?oldid=4447083"
Community content is available under CC-BY-SA unless otherwise noted.