M-O (meaning Microbe Obliterator) is one of the two tritagonists of the 2008 Disney•Pixar animated feature film WALL-E.

M-O is a persistent neat-freak. He is obsessed with keeping things clean and tidy. His obsession with cleanliness is so great that he followed WALL-E all around the Axiom (using WALL-E's dirt trail as a guide).

Similar to the most of the other robots WALL-E interacts with in the film, M-O breaks away from his directive after meeting the robot. This is shown when he hesitantly moves away from his original routine in order to clean WALL-E's dirt trail. M-O is also shown to be respectful of others. An example of this is when he ushers the defect robots into giving WALL-E and EVE some privacy, despite being happy that EVE was able to repair the former.

He is a robot aboard the Axiom, programmed to clean items deemed "contaminated". M-O is obsessed with keeping things exempt of "Foreign Contaminants" and he can and will do anything to complete those tasks (an example is when WALL-E teasingly wipes the dirt off one of his treads and covers M-O's face with it, he screams and frantically tries to clean his own face). He travels around on a single roller, equipped with cleaning tools. M-O eventually befriends WALL-E after all his attempts to clean the dirty robot, following him all over the ship. His timely arrival in the garbage disposal area proves significant when he unintentionally wedges himself between the closing doors to prevent WALL-E and EVE from being jettisoned out into space. He then fully cleans WALL-E and accompanies him and EVE into bringing the plant to the holo-detector on the lido deck so the Axiom can jump to Earth. M-O also joined in the fight against the Stewards with EVE and the defective robots (though he is unable to do any damage). Later, WALL•E accidentally drops the plant when he sideswipes the holo-detector and the plant is thought to be lost until M-O finds it thanks to his functionality that detects foreign contaminants. He lets other robots and humans pass it all the way up to EVE. After they arrive back on Earth, M-O ushers the other robots into giving WALL-E and EVE some privacy as they share a tender moment. Together, M-O, WALL-E, EVE, and all the humans work together to bring Earth back to its former glory.

Basic Parts: A brush instead of arms, a white body, yellow eyes on a black LED screen, a siren, a blue brush cover, a roller, a backpack, and extendable black parts. 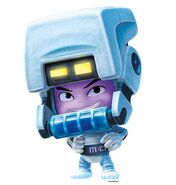 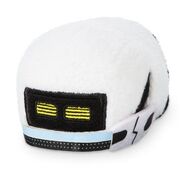 M-O with WALL-E, EVE, and the Reject-bots. 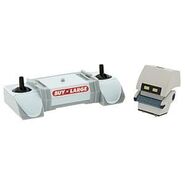 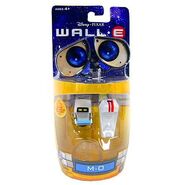