Ma Tow Truck
Ma Parker is the main antagonist in the episode "Calling All Cars" of the series Bonkers.

Ma Parker is a Toon tow truck who has tricked Lucky into thinking she's really sweet, but is found out by Bonkers is that she is really a criminal who is stealing parts of their police car to build a suit of armor for a monster truck rally. With her armor, she is nearly invulnerable from the outside, but Bonkers tricks her into opening her hood. Despite her efforts, Ma is helpless as Bonkers tinkers with her engine until she is unable to move. He then proceeds to arrest the immobilized Toon truck. 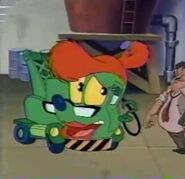 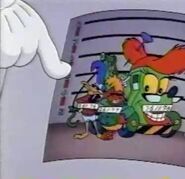 Ma Parker with Wooly and Bully