Gigantic and slender red semi-truck, bulky, lots of lights on him

To get Lightning McQueen to races on time

His speed
His engines
His strength

"Hey, kid! Congrats on a tie!"
"Just stopping by for a quickbreaker, kid. Ol' Mack needs to rest."

"Endless days on the road and sleepless nights criss-crossing the country... For some this life would quickly grow old. But not Mack. No sir. Mack knows how important his role is. He's driving Lightning McQueen, the world's fastest racecar. He's part of a team, and everybody knows there's no I in team, just like there's no I in Mack."

Mack is responsible for transporting Lightning McQueen to all his races. After McQueen pushes him to drive all night to California, Mack falls asleep and ends up losing McQueen. He is seen on television as he arrives in California and discovers that McQueen is missing. At the final race, he was to act as McQueen's pit crew before the Radiator Springs folks came. He later congratulates McQueen for his loss after he chose to help the King finish his last race. During the credits, he watches parodies of other Pixar movies and notes that all of them feature a character played by John Ratzenberger, and amusingly, he is voiced by Ratzenberger as well.

Mack makes a couple minor appearances as part of McQueen's Piston Cup racing team. He also has some slight differences in his design in this film, possibly to take on McQueen's own redesign: while in the original film his cap-shaped wind deflector is white, here it is red. The design of his trailer is also different.

Mack is Lightning McQueen's trusted long-haul driver, crisscrossing the country from race to race, always with a smile on his grill. After dropping McQueen off in Radiator Springs with his fourth Piston Cup championship trophy, Mack sets off with the rest of the pit crew for a well-deserved vacation. Who knew that McQueen would end up jetting off to a race around the globe in the World Grand Prix?

In the film, he is briefly seen at the beginning when McQueen comes back to Radiator Springs, where he says one of his only two lines, "Oh, these best friend greetings are getting longer every year." He doesn't accompany him to the World Grand Prix, due to being on vacation. At the end he talks with Lizzie and says the other of his only two lines of the movie, "Oh, those two are perfect for each other."

Mack reappears in this film, but like in the previous films, remains Lightning McQueen's driver. In the opening scene, he taps Lightning's trailer, asking his boss if he was ready for his race.

Four months after McQueen's accident, Mack drives him, Luigi and Guido to Rust-eze Racing Center, where his boss planned on training to boost his speed to beat Jackson Storm. After an unsuccessful week training under Cruz Ramirez in both the racing center and on Fireball Beach, McQueen decided to go to Thunder Hollow to race at the dirt track. When Luigi and Guido advised going to a public place where the press would easily recognize him, Mack assure the group that he was a master of disguise. To that end, Mack camouflaged his cap and his trailer to resemble a party truck and upon arriving at Thunder Hollow, had Luigi cover McQueen in mud. Unfortunately, as they all discovered, the racetrack was actually a demolition derby, which Cruz won but McQueen was exposed to the crowd.

As they were leaving Thunder Hollow, Mack uncomfortably had to listen to McQueen taking his anger out on Cruz, telling her she's no racer and accidentally breaks her trophy, causing her to order Mack to pull over, forcefully opening the trailer when Mack hesitated. Cruz then told everyone that she dreamed of becoming a racer but lost her confidence at her first race. She resigns as McQueen's trainer and heads back to the racing center.

Mack later parked underneath an underpass to retire for the night while McQueen considered his future as he watched Storm setting a new lap record on TV, leading him to calling Mater, who advised him to seek out Doc Hudson's old crew chief Smokey in Thomasville. Thus, early next morning, Mack manages to catch up to Cruz, upon which McQueen persuades her rejoin them. Afterwards, they proceeded onto Thomasville, where upon Mack pulls over upon arriving at Thomasville Racetrack.

After a week training under Smokey, Mack had to pull McQueen to reach the deadline for the Florida 500.

During the credits, Mack becomes both McQueen and Cruz's driver with a new trailer sporting Cruz's legendary flip.

Mack appears in Radiator Springs Racers at Cars Land in Disney California Adventure when entering a tunnel, the cars nearly crash into him.

"Thank the manufacturer! You're alive!"

Mack annoyed about using John Ratzenberger for every film

Mack in Cars 3.
Add a photo to this gallery 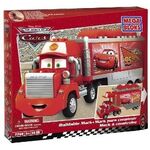 Mack as a carry case

Mack with a gray trailer

Mack as a toy without his trailer

Mack with a short trailer 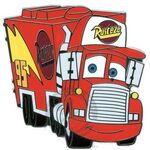 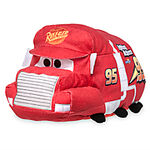 Retrieved from "https://disney.fandom.com/wiki/Mack?oldid=3926752"
Community content is available under CC-BY-SA unless otherwise noted.