Disney Wiki
Register
Don't have an account?
Sign In
Advertisement
in: Objects, Tim Burton's Alice in Wonderland, Articles of Clothing,
and 3 more

“The absolutely best way to travel is by hat.”
―The Mad Hatter

Mad Hatter's hat is the hat that the Mad Hatter wears on a regular basis. It is the key element in his costume. The hats that the Mad Hatter has worn in different movies have varied, mostly in color. But in all the films, the hat has been a top hat with the mark 10/6 on it like it was in the books.

In Tim Burton's Alice in Wonderland Tarrant Hightopp wore a wellington top hat. The earlier hat of his was made of beaver felt and silk, the more iconic hat of his, what he wore most of the time in the film, was made of leather and silk.

In Once Upon a Time, the hat owned by Jefferson can cross dimensions to other lands by opening portals inside it.

The Portal of Doors is a room in Jefferson's Hat where portals to various other lands are located. It is accessible to anyone who jumps into the hat. The room is circular and rounded with red curtains containing at least seventeen different doors. Some of known doors are:

Via his hat, Jefferson traveled to bring Dr. Victor Frankenstein from the Land Without Color to the Enchanted Forest so the doctor could make a deal with Rumplestiltskin. Eventually, he retires from his profession as portal-jumper and settles down as a mushroom seller with his daughter, Grace. He makes mention to the Evil Queen he stopped portal-jumping because that's how Grace lost her mother and doesn't want her to lose him, too. The Evil Queen asks for his assistance to travel to another land where she wants to steal something back which the Evil Queen of Hearts took from her. The rule of the hat is the amount of people who go into it must also be the same amount that come out. In fact, the thing the Evil Queen takes back from the Queen of Hearts is not an item, but a person—her father. Per the rule of the hat, only two who go in can leave. She traps Jefferson in the world while her father and herself leave to return home. Since then, Jefferson becomes obsessed with making hats to find the one that will work so he can go back home to his daughter.

The Evil Queen later used the hat and one of her guards to send Captain Hook to Wonderland to kill her mother Cora. Since Cora couldn't be killed, Captain Hook took Cora's body back to the Enchanted Forest while leaving the guard that accompanied him trapped in Wonderland.

David Nolan later tried to use Jefferson's Hat to get Emma Swan and Mary Margaret Blanchard back to Storybrooke only for it to be burned by Albert Spencer. 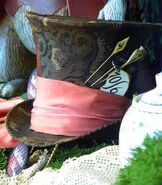 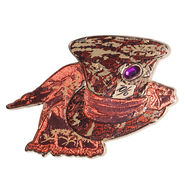