Mad Tea Party is a spinning teacup ride at five of the six Disneyland-style theme parks around the world. The ride theme is inspired by the Unbirthday Party scene in Walt Disney's Alice in Wonderland. The ride has gained infamy over the years for the number of guests who get motion sickness as a result of the spinning component to the ride.

All five versions of the attraction are located in Fantasyland, and all except the Tokyo version were opening-day attractions at their respective parks. Disneyland, Disneyland Paris, and Hong Kong Disneyland versions do not have a big teapot in the center of the ride platform.

Like Dumbo the Flying Elephant, Disneyland, and its Hong Kong counterpart have a replica of one of the teacups located outside of the attraction to be used by guests for better photo opportunities.

A similar ride known as "Hunny Pot Spin" based on Winnie the Pooh has opened at Shanghai Disneyland.

In March of 2020, the Mad Tea Party was chosen as the theme for the third monthly installment of the Minnie Mouse: the Main Attraction merchandise collection.

Several concepts for the Mad Tea Party were originally much more outrageous compared to today's version. One drawing showed the Mad Hatter's dinner table featured in the center of the ride with various lanterns and decorations all around. Another drawing showed 20 teacups circling a central hub, making it similar to a racetrack with banked curves.

For the first few months after the ride first opened, the teacups spun on a bare platform before it was painted with the psychedelic spiral that exists today. Also, during the ride’s first two years, the teacups had no brakes or clutches; nothing limited how fast they could be spun.

Until 1982, the attraction's original location was directly behind Sleeping Beauty Castle (in the present-day location of King Arthur Carrousel). It was also given slight modifications in 1972 with ornamental arches connecting the light posts, and again in 1978 with the platform and teacups being repainted. In 1983, the whole attraction was completely remodeled and relocated to its present location near the Matterhorn Bobsleds. It also incorporated a few ideas from the original concepts, such as the Japanese lanterns.

In 2004, the attraction was modified to make it more difficult to spin fast after a disabled rider lost his balance and slipped from a teacup.[2] Like other remaining 1955 attractions, one of Disneyland's teacups was painted gold in honor of the park's 50th anniversary in 2005.

The installation at Disneyland was manufactured by Arrow Development.[3]

Like Disneyland, Magic Kingdom's original 1971 version of this attraction opened without a roof. It was eventually added in 1974 (along with the central teapot) due to extreme weather conditions. It was updated in 1992 with a new color scheme, new music, and colorful lanterns. In 2010, the canopy was repainted.

They were featured in The Muppets at Walt Disney World, where Beauregarde forced Miss Piggy to go on the ride with him.

On February 2, 2021, Magic Kingdom reopened after being temporarily closed due to the COVID-19 outbreak's impact on Florida. The ride closed temporarily on February 22 and reopened March 5, in time for Walt Disney World's 50th Anniversary celebration.[4]

The Paris version of the attraction is the only version to feature a petal-shaped glass roof and surrounding gardens, due to the typically overcast northern European climate. It also uses the Dormouse's teapot outside of the ride, near the March Hare's Refreshments. The teacup designs were later used for Tokyo Disneyland and Hong Kong Disneyland's teacups.

David Spade with partner Jillian Grace and their daughter Harper riding the Mad Tea Party at Disneyland in September 2011.

The Dormouse figure used at the ride, as seen at Disneyland Paris 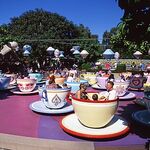