Maddie is working on an important spell, but her three baby sisters keep getting in the way.

Maddie is in the middle of trying to revive Mrs. Jonkins' pet flea, Fleafy, back to life when she is interrupted by the arrival of her younger siblings, Rosemary, Lavender and Ginger. They demand that she play with and juggle them like she used to do and tells them that she will get to it in a couple of minutes. Three hours later, she is still working on the spell and the tadpoles end up disrupting her and bring a tree to life. Marcy, who was studying the flora and fauna witnesses Maddie turning the tree back to normal (surrounding it with roses in the process) and she berates her siblings for the disruption. After they leave, Marcy introduces herself and expresses interest in wanting to learn spells too. Maddie takes to Marcy's enthusiasm and they go off to get spells, much to the tadpoles jealousy.

After collecting ingredients for the day, Maddie explains to Marcy that she used to play with her siblings all the time, but she discovered her passion for magic and now does not have any time to play with them. Marcy suggests that she make time, but Maddie believes that her work is more important. Rosemary, Lavender and Ginger observe the two from their bedroom, believing that Maddie has replaced them and they come to the conclusion that they need to make themselves older so that Maddie will play with them again. In the morning, they steal her spell book and create a spell, but Maddie berates them after seeing that they scribbled in her book. Nevertheless, the tadpoles believe that they have completed the spell for them to use.

Maddie and Marcy manage to bring Fleafy back to life, but their victory is interrupted by the arrival of Maddie's siblings who have now grown giant. The three end up wrecking havoc across town, but cry when they realize that they cannot stop growing. Maddie realizes that they have not perfected the growth spell and that their decision was based on her comment of telling them to grow up. Now knowing that the situation is her fault, Maddie has Marcy work on an antidote while she makes herself grow giant size to calm them. Maddie juggles her sisters as Marcy gives them all the antidote. Maddie apologizes to her siblings for not being a good sister and they forgive her while Fleafy is still alive, though his head falls off. 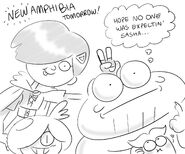 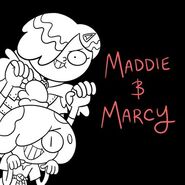