"Oh, frostbite!"
Magee is a character from the television special Prep & Landing. Voiced by Sarah Chalke, she is the coordinator in charge of the North Pole Christmas Eve Command Center for a secret group of elves who prepare for Santa's arrival at homes every Christmas Eve.

Magee has been the North Pole Christmas Eve Command Center Coordinator for almost 200 years. Before her current post, she proved her managerial prowess as part of Toy Design, where she was credited with streamlining the development pipeline.

She assumed her career would be in toys, but the Big Guy personally asked her to oversee Prep & Landing as NPCECCC, a role once held by Magee’s own mother.

Magee receives a fair amount of unsolicited advice from her mother, especially when it comes to work and romance. Her mother initially held out hope that Wayne and Magee would marry, but the pair dated only briefly and instead became close friends.

Likes: Magee loves egg nog lattes, one after the other. She prefers Yuletide Joe beans, but also enjoys selections from her International Coffee of the Month Club.

Dislikes: Magee doesn’t like when Wayne offers friendly suggestions on how to better do her job.

Magee is an avid figure skater, but hasn’t figured out how to skate and make jewelry at the same time yet, but she is determined to find a way. 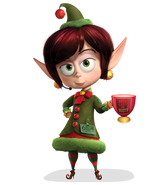 Retrieved from "https://disney.fandom.com/wiki/Magee?oldid=3871427"
Community content is available under CC-BY-SA unless otherwise noted.