The Simpsons in Plusaversary (cameo)

Darkwing Duck
Bonkers
House of Mouse
Once Upon a Time
Descendants: Wicked World

Metamorphosis from bits of wood
The Magic Brooms are characters from Walt Disney's film Fantasia. They are the primary antagonists in "The Sorcerer's Apprentice" segment.

The brooms are besom brooms with brown handles and yellow bristles. They have been animated by magic, and have sprouted thin, brown arms and four-fingered hands as a result. Their bristles are their "legs". The brooms are constantly seen carrying one brown bucket of water in each hand. Each bucket has a silver handle and two silver hoops around them.

In the short, one broom is brought to life by Mickey Mouse. He had done the spell in order for the broom to do his work, instead. The plan goes by smoothly until Mickey falls asleep and wakes up hours later once the building is flooded. Mickey tries to stop the broom but it does not work. Mickey then grabs an ax and chops the broom into pieces. From the two halves, as well as the scattered splinters, an entire army of water-carrying brooms arises, and the entire room is soon filled with water. Eventually, Mickey's mentor Yen Sid comes and ends the chaos.

The brooms made a cameo appearance in the film, sweeping at the Maroon Cartoons Studio while a man plays "The Sorcerer's Apprentice" on a saxophone.

Two brooms made a cameo appearance in the Darkwing Duck episode "Hot Spells". When they appear, Beezelebub is peeved that they don't clean windows.

In the television series House of Mouse, the brooms make cameos along with many other Disney characters. In the show, the brooms work at the club as its janitors as well as its means of extinguishing fires and are frequently seen sweeping with modern brooms as a joke. In the episode "Donald's Lamp Trade", one of the brooms (taking a role similar to Magic Carpet when he follows Aladdin in the Cave of Wonders) follows Donald and they end up walling off of Pride Rock and go flying.

A Magic Broom made a cameo appearance as a regular broom at the Town Square.

In Kingdom Keepers II: Disney at Dawn, the Broomsticks follow Finn around Hollywood Studios. In Kingdom Keepers V: Shell Game, they attack the DHI base with buckets of acid but are thwarted by Charlene Turner.

In Once Upon a Time, the magic broom is an enchanted, walking broomstick that Rumplestiltskin used in order to find the Sorcerer's Apprentice in the town of Storybrooke.

The Brooms appear as enemies in this game.

The Brooms appear as enemies in this game as well.

The Brooms also appear as enemies in this game first encountered in the Palace levels usually in the slippery ice parts. 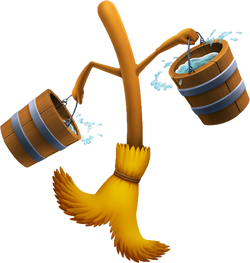 The brooms appear in the Fantasia-based transition stages and in the ending credits animation chasing a Blotling. They also serve as the inspiration for the Sweeper Blotlings. A lifeless broom can be seen in Yen Sid's studies during the opening. The Magic Brooms reappear in the sequel, Epic Mickey 2: The Power of Two.

The Magic Brooms appear in Disney Infinity as enemies, however, several seem to aid Sorcerer Mickey as one of his attacks. In the 3DS version, they appear as cameos on the game board moving space turning them into coin spaces.

They were seen along with Mickey Mouse's float in the Celebrate A Dreams Come True Parade at the Magic Kingdom.

The brooms also have topiaries at Disney's Hollywood Studios.

In Mickey's PhilharMagic, when Donald accidentally loses the sorcerer hat, he journeys off into different Disney films including Fantasia where the brooms splash the water in the buckets onto Donald eventually leading him to The Little Mermaid. This attraction also shows 2 exclusive broom variations: a tiny broom with a single normal-sized bucket (which Donald took so the broom wouldn't splash him), and an enormous broom with a single and equally giant bucket (which it used to flood over Donald after it got him to return the tiny broom's bucket).

In Tokyo DisneySea's version of Fantasmic!, they appear marching on the Sorcerer's Hat stage during the Sorcerer's Apprentice sequence opening the show.

They also appeared at Celebrate! Tokyo Disneyland opening scene before Mickey takes the balcony on the Cinderella Castle in shadow note.

Multicolored variants of the Magic Brooms appear in the Fantasia scene of Voyage to the Crystal Grotto, dumping water on Sorcerer Mickey.

The Disney Wiki has a collection of images and media related to Magic Brooms.