Disney Wiki
Register
Don't have an account?
Sign In
Advertisement
in: Characters, Sofia the First characters, Characters who fly,
and 10 more

“Girls, what you've got is a wild carpet”
―Princess Jasmine

The Magic Carpet (better known as just Carpet) is a sentient Persian carpet that appears in the Disney Junior animated series, Sofia the First. It is one of a few carpets belonging to Prince Zandar but, unlike the others, this one was a wild carpet until it was tamed by Sofia and Amber with some help from Princess Jasmine.

In its debut appearance, this Magic Carpet first appeared after Sofia, who it took an instant liking to, happily walked up to it. Unfortunately, Sofia made the mistake of asking her big sister Amber, who never rode a magic carpet before and who feared trying new things, to ride with her. Sensing Amber's fear, the carpet refused to trust Amber to tell it where to go and wouldn't obey orders. The carpet's disobedience led to a wild ride that stranded them at a marketplace, which Sofia dragged it into.

Afterwards, it escaped from them and stole Amber's tiara which made Amber finally lose her temper and get violent with the carpet in a way that got them dumped in the Hanging Gardens with no way out other than to fly out.

Fortunately, Sofia's Amulet summons Princess Jasmine who helps them tame the carpet by explaining that this carpet is a wild carpet and that it's disobedience is because of Amber's fear of the unknown. This leads the three of them to finally work together.

The Carpet reappears in "New Genie on the Block" after King Roland and Queen Miranda arrive at Tangu Palace and are informed that Sofia didn't show up. They go looking for her with Zandar on magic carpets and Roland rides this carpet. Roland's fear causes the carpet to give him a bumpy ride, which is made worse as the group keeps bumping into the creations of Kazeem, which spook the carpet to no end. After the group reunites with Sofia, the carpet flies up and wraps itself around her, clearly happy to see her again. After the mess Kazeem made is cleaned up, the carpet takes part in Sofia and Zandar's magic carpet dance.

Offering a seat for Amber 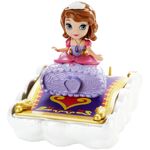