Disney Wiki
Register
Don't have an account?
Sign In
Advertisement
in: Objects, Magical Objects, Once Upon a Time objects,
and 4 more

This article is about the wand owned by the Fairy Godmother. For other uses, see Wand (disambiguation).

House of Mouse
Once Upon a Time

The Fairy Godmother's wand in the Charles Perrault fairy tale

Assists Cinderella in gaining her "happily ever after"

In the Fairy Godmother's possession

The Magic Wand is the powerful magical wand of Cinderella's Fairy Godmother. Its powers are summoned by saying the famous magic words "Bibbidi-Bobbidi-Boo".

In the film's sequel, The Fairy Godmother uses the wand to help the mice to make a new storybook of Cinderella, to turn Jaq into a human so that he can help Cinderella adapt to the life of a princess. Fairy Godmother also used it to save the mice who were sliding down the stairs to show Cinderella their new book.

In the animated series, the Fairy Godmother is almost always seen with the wand. In "Ladies' Night", she used it make Minnie a dress but forgot to warn her that it disappears at midnight. In "Goofy's Menu Magic", Goofy used the wand by accident while making soup, causing the club to flood. In the same episode she used the wand as a shish kebab skewer. In "House of Magic", in her attempt to perform a magic act for the audience, Daisy accidentally makes the audience disappear.

In the ABC fantasy drama Once Upon a Time, the wand is in the possession of the Fairy Godmother. However, it is sought by Rumplestiltskin, who finally finds the fairy appearing to Cinderella. He kills the Fairy Godmother and collects the wand for its magic. After that, he uses it to allow Cinderella to attend the ball for the price of her first child, Alexandra.

In Storybrooke after the curse was broken, Rumplestiltskin uses the wand once more to collect fairy dust in the mines to fuel the wand. It is used to create a trap over the portal in the wishing well to prevent anyone (specifically Cora) from trying to cross over from the Enchanted Forest.

Another version of the wand appears in Season 7. Lady Tremaine captures Cinderella's Fairy Godmother and uses her wand to turn her to ashes. She then used it to give Captain Hook from the Wish Realm the younger appearance of the real Hook. She later used the wand to enchant Cinderella's hand and later her own hand to gain the ability of remove hearts.

After the children of Maleficent, Jafar, Cruella and the Evil Queen are sent to Auradon Prep, Maleficent has her daughter Mal take charge of her plan to steal the Fairy Godmother's Wand so that she can bend both good and evil to her will. In the book The Isle of the Lost, which acts a preview to the movie, it is revealed the wand is powerful enough to bring back even dead people and restoring them to a completely alive state, as if they never were dead in the first place.

In order to rescue Ben from the gang of Pirates, Jay and Carlos create a 3D replica version of the wand as a diversion to trick Uma into believing that it's the real one.

During Mal and Ben's royal engagement party, Mal makes a heartfelt speech about how everyone is capable of good and evil, and should put the past behind them by taking down the Isle's barrier forever. Ben declares this, and Fairy Godmother hands over the wand with pleasure. Everyone watches as Mal, Jay, Evie, and Carlos say the spell together, and then Mal uses the wand to disable the barrier and form a bridge between the Isle and Auradon.

The wand in Once Upon a Time

The wand after appearing by the Fairy Godmother

Anastasia (disguised as Cinderella) walking toward the wand

Lady Tremaine preparing put a spell on the Prince

Wand flung into the air from Fairy Godmother's sleeve

Jaq and Gus with the wand

Jay and Gus cast a spell on Lucifer, shrinking Lucifer

Gus throwing the wand to Cinderella

Anastasia with the wand 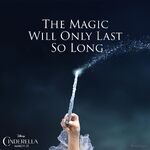 The magic wand in Descendants 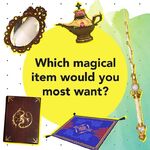 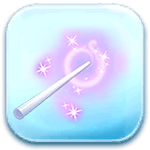 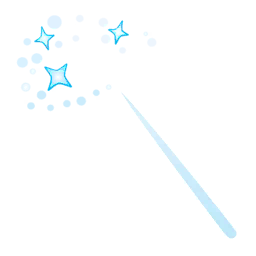 The Magic Wand as an emoji from Disney Emoji Blitz.