Magical Tetris Challenge, known in Japan as Magical Tetris Challenge Featuring Mickey, is a puzzle game by Capcom for the Nintendo 64, Game Boy Color and PlayStation (the latter version was released in Japan and Europe only). It was released on January 14, 1999. It is a version of Tetris featuring Disney characters. It is one of the few N64 titles to be entirely in 2D. The game was also released in arcades on Seta's Aleck 64.

In Magical Tetris, the player, as either Mickey Mouse, Minnie Mouse, Donald Duck, Goofy or Pete (Game Boy Color version only), is pitted against an opponent, which is either the A.I. in Story or Endless Modes or another player in Versus Mode. Players control the standard seven Tetris pieces, race to make lines (and consecutive line clears, called combos), and attack the other player. The attacked player receives a set of "magical" pieces, which range from pentomino pieces to square blocks and even very large (up to 5x5-block sized) pieces. Players can also counter one another by making multiple lines to send the pieces back to their opponent. Because of the pentomino pieces, it is possible for a player to clear five lines at once (called a Pentris) using a 5-block straight piece.

Updown Tetris can be considered as an extension of Classic Tetris; Updown Tetris is available in Story and Versus Modes, whereas Classic Tetris takes up what would be the Endless mode. The magical pieces are absent from this mode, and attacking the other player sends a number of lines to the other player; the lines rise from the bottom as filled lines with a one-block gap in a predetermined column and could be used as further lines to attack the opponent.

During Magical and Updown Tetris, making lines and combos fills a special meter alongside the board called the Magic Meter, with the fill line initially set to the fourth row; when a player's meter is filled, all of the blocks drop, filling any gaps, and one predetermined column drops out; all the blocks above the meter are wiped clean, the meter resets, and play continues. The meter's fill level may or may not rise depending on the difficulty. If it does rise, it moves up two lines which makes it harder to fill and less effective. The meter can be reduced by two lines (to a minimum of two) by scoring an "All Clear" of completely clearing the board of pieces. In this way, the player is left with filled columns and one empty column, allowing either a Tetris or Pentris to be made easily using a straight piece.

Pieces spawn from the top one row at a time; column grids and a "ghost" piece are provided to aid the players in positioning and dropping pieces. Play stops when a piece entering the grid has to overlap a piece in the board. Players are scored according to the number of combos and counters they make in addition to any other points earned.

Players can choose to be one of four characters (Mickey, Donald, Goofy, or Minnie) to play out the story; each character has a different storyline, all of which connect together, with Goofy and Donald's stories taking place first, Minnie's story taking place a little later, and Mickey's story taking place last. In each character's story, they play a round of Tetris against each of the other player characters before taking on Pete and his henchmen, a Weasel modeled after the ones from The Wind in the Willows and the Big Bad Wolf.

Donald's storyline begins with him fishing when he ends up catching a mysterious glowing gemstone with weird symbols carved into it. He shows it to Goofy, who suggests he go take it to Mickey to see if he knows anything about it. Donald gives Goofy a chip from the stone and, after helping Minnie bake cookies, heads over to Mickey's factory, but all Mickey is able to figure out is that the gemstone is from another world. Donald decides to make the stone into an amulet, but when he arrives home, Weasel and Big Bad Wolf show up, demanding he hand the stone over. Donald refuses, beating Weasel in a game of Tetris, but Wolf uses this distraction to steal the gem. Donald pursues them to Pete's hideout and beats Wolf and Pete in Tetris. After losing, Pete returns the gem to Donald, but not before stealing its mysterious glow. Donald heads home with his stone, none the wiser.

Meanwhile, Goofy decides to ask Mickey to make an emblem for his tractor out of the chip that Donald gave him. He does so, but when Goofy goes to show his it to Donald, he runs into Weasel and Wolf, who steal the emblem. Goofy chases after them and, like Donald before him, beats the villains in Tetris, but Pete removes the gemstone's glow before returning the emblem to Goofy.

Later, Minnie finds that Donald left a piece of the gemstone at her house when he was helping her bake cookies earlier and, after she gets his permission to keep it, asks Mickey to make it into a pendant. After he finishes it, they go to show it to Goofy, when it suddenly gets caught on his windmill. The pendant lands on an abnormally large pumpkin in Goofy's garden, which he allows Minnie to take to make into pumpkin pies. However, when Minnie returns home, Wolf and Weasel come and steal her pendant. She and Mickey chase them down to Pete's hideout and, as with before, beat the villains in Tetris. Like before, Pete steals the magical glow from the gem before giving back Minnie's pendant.

Sometime later, Mickey is helping Minnie bake cookies when Pete suddenly barges in and demands she marry him. She refuses, so using the power he stole from the pieces of the gem, Pete brainwashes her into accepting his proposal and then transports Mickey to Goofy's farm. After he battles an also-brainwashed Goofy and Donald, Mickey asks the latter how he found the stone. Donald shows him the spot where he was fishing earlier, which tells Mickey that the stone was underwater. After a battle with Weasel, Mickey dives to the spot where Donald fished the stone out and finds a spaceship, confirming his earlier statement about it coming from space. He also finds that the gem had been broken off of a tablet that says anyone can use the stone to make their wishes come true, but they should not abuse it for evil purposes. Mickey promptly storms Pete's hideout and, beating Wolf and Pete in Tetris, demands that he release Minnie and stop using the gem's power for evil. Pete refuses to give in and tries calling for more power from the stone, but it backfires on him, sucking him into a vortex while Minnie is set free.

In Signal Tetris, clearing a line will cause the floor blocks below the clearing standard seven Tetris pieces will change color. The objective is to get the floor blocks to match the colors of the line of blocks under the floor. As a result, the player has to be careful about positioning Tetriminos when clearing lines. Easy uses just red and blue for the floor blocks, but the higher difficulties add more colors.

Towering Tetris starts you with a pile of random garbage blocks that raises throughout the game. The objective is clear the garbage blocks faster than they can raise until you reach the bottom of the pile and clear the keyhole block on the bottom line. In addition to the standard pieces, this mode also features a special 1*2 Piece that shoots an endless supply of 1*1 blocks when you press A or B and then disappears when it locks into place.

In this puzzle mode, you are given a preset sequence of Tetriminos with which you must clear all of the Target Blocks (Represented by Acorns, Lightning Bolts, or Flames depending on Mode) on the screen. Each difficulty level has it own set of puzzles, with over a hundred total puzzles.

The game has a 4.2/5 rating from Amazon for the N64 version with 9 reviews, while the GBC has the same rating, but with 5 reviews. 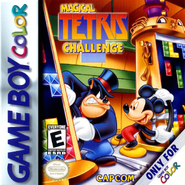 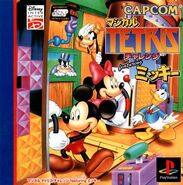 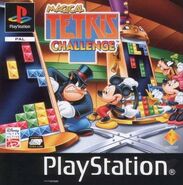