Deceased
The Magus is a character from the Disney animated TV show, Gargoyles. He was the court magician of Castle Wyvern, and eventually became Princess Katharine's top advisor.

Little is known about the history of the Magus or the rest of the residents of Castle Wyvern. The Magus was originally the Archmage's apprentice but became the court magician of Castle Wyvern following the Archmage's banishment. When the Archmage returned and poisoned Prince Malcolm, the young Magus was given the task of finding a cure but announced that he could only do so if he had the Archmage's Grimorum Arcanorum. Three gargoyles who would later be named Hudson, Goliath, and Demona, managed to track down and defeat the Archmage and retrieve the Grimorum so that the Magus could cure Malcolm's poisoning.

The Magus was Princess Katharine's adviser during her reign over Wyvern and shared her dislike for the gargoyles. When the Captain of the Guard and Demona betrayed the castle to the Vikings led by Hakon, causing the destruction of the Wyvern Clan, the Magus, the princess, and refugees within the castle walls were taken, hostage. It was the grief-stricken Magus that cast the spell that imprisoned the remaining members of Goliath's clan in stone believing that the gargoyles were responsible for Katharine's supposed death. However, upon learning of Katherine's survival, he became ashamed of his actions and felt tremendous guilt and finally came to realize the error of his prejudiced ways against the gargoyles. However, before he and Princess Katherine left, Magus froze Goliath at his request and felt compelled to protect the rookery eggs as a way of making up for his actions and wrong views against the gargoyles.

When the Magus' former master, the Archmage, returned and attacked Avalon, the Magus helped Elisa Maza awaken the sleeping king from his enchanted sleep so that he could aid in the battle. By tapping into Avalon's magic, the Magus was able to defeat the Weird Sisters in the Hollow Hill, but using too much magic without anything to channel it through ultimately cost him his life. He was laid to rest forever in the exact spot where King Arthur was awoken from with Katherine at his side, saying that he would never leave her. 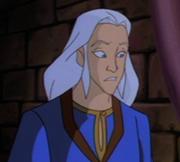 An older Magus on Avalon 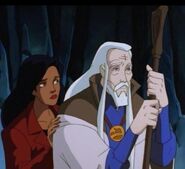