2006-present
Maia Charlotte Mitchell is an Australian actress, voice actress, and singer, who is part of the main cast in the Freeform teen drama series, The Fosters from 2013 to 2018 and its spin-off, Good Trouble.

For Disney, she played McKenzie in the Disney Channel Original Movie, Teen Beach Movie, and its sequel, Teen Beach 2, and she appeared in "Phineas and Ferb Musical Cliptastic Countdown Hosted by Kelly Osbourne". She made a cameo appearance as the operator of a cupcake truck in the Muppisode "Food Fight". She has also made a guest appearance in the Jessie episodes "Jessie's Big Break" and "Jessie's Aloha Holidays with Parker & Joey" as Shaylee Michaels. She will reprise that role for a crossover special with Liv & Maddie's Joey and Parker Rooney. She recently provided the voice of Wendy Darling in the Jake and the Never Land Pirates special, Jake and the Never Land Pirates: Battle for the Book. In addition, she voiced Jasiri in the American animated television series The Lion Guard. 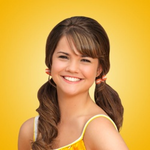 Mitchell with Miss Piggy in a Muppisode.

Mitchell at the premiere of Let It Shine in June 2012.

Mitchell at the premiere of Teen Beach Movie in July 2013.

Maia Mitchell with Ross Lynch at the premiere of Teen Beach Movie in July 2013.

Maia Mitchell at premiere of Teen Beach Movie 2 in June 2015.