The third Main Street, U.S.A. to open was in France at the Euro Disneyland theme park (now called Disneyland Park). This street is themed slightly differently from the others; the decor is more modern, set roughly in the 1910s, with influences from the flapper and ragtime eras and an emphasis on baseball culture and the rise of the automobile. Originally, the street was intended to be completely themed to the 1920's, rather than late Victorian, but the idea was scrapped when the association with gangsters was deemed to not to be family-friendly enough. Instead of horse-drawn trolleys and Victorian vehicles, plans originally featured trams to fit with the 1920s theme, but were scrapped.

Also, due to often cold, rainy weather in the area, the Imagineers compromised and offered covered walkways on either side of Main Street called "arcades". There is the "Discovery Arcade" on the side closest to Discoveryland, and the "Liberty Arcade" on the side closest to Frontierland. These provide access to all of the shops along the length of Main Street, while giving shelter from the weather. They also provide a passageway when the street is crowded during parades and fireworks. 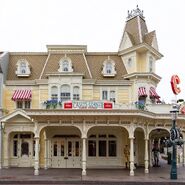