Start a Wiki
The Main Street Electrical Parade is a long-running parade that has been presented at several Disney theme parks, first appearing at Disneyland, where it ran from 1972 to 1996. The Magic Kingdom version of the parade ran from 1977 to 1991, and again from 1999 to 2001. Disney's Electrical Parade from Disney's California Adventure was sent to Magic Kingdom in summer of 2010, where it replaced Spectromagic and has not yet returned to California Adventure

The parade features scenes from Disney films depicted through the use of colorful electric lights, and features many Disney characters. The parade's theme song is a version of Perrey and Kingsley's 1967 song "Baroque Hoedown" arranged by Don Dorsey.

Currently, there are two operational versions of the Electrical Parade:

This is one of the two remaining operational versions of the Electrical Parade. It is a surviving incarnation of the original Disneyland Anaheim run.

Walt Disney World's Magic Kingdom premiered its version of the Main Street Electrical Parade on June 11, 1977, coinciding with the premiere of the new, nearly identical, three-dimensional Disneyland version that year. This version ran until September 14, 1991, when the parade was shipped to the soon-to-open Euro Disneyland. It differed from the Disneyland version in that it featured the Toy Soldiers from Babes in Toyland.

In 1999, the Anaheim version was sent to Florida, where the parade ran again until 2001, after which it was sent back to the Disneyland Resort, where it would then begin its run at Disney's California Adventure to improve its flagging attendance.

In April 2010, Disney's Electrical Parade ended its run at Disney California Adventure and was sent to Florida, where it began its new run at Walt Disney World's Magic Kingdom on June 6. The Disneyland Resort loaned the parade out to Walt Disney World in order to prepare for Disney California Adventure's latest nighttime entertainment offering, Disney's World of Color, which was to premiere June 11. Because the parade is still the property of the Disneyland Resort, it has been suggested that no physical changes were allowed to be made to the parade, explaining why the drum still reads "Disney's Electrical Parade" rather than "Main Street Electrical Parade." Insider sites such as MiceAge have suggested the parade will remain in Florida through 2012, while videos from Disney suggest the parade will only have a ten-week run.

Disney announced on July 29, 2010 that it will be extended to an "open ended" run at the Magic Kingdom.

arade. This version featured an entirely new soundtrack focused more on orchestral music than electronic. It still featured "Baroque Hoedown," though somewhat stylistically different from the Perrey and Kingsley version. This new version of the parade featured updated versions of classic floats, while introducing new ones based on Toy Story, Monsters, Inc., Aladdin, Finding Nemo, Winnie the Pooh,  and "it's a small world". During the Christmas Season, the Soundtrack gets enhanced with Christmas Carols along with decorated floats and changed dialogue to go along with the Christmas season.

It is sponsored by Unisys.

(Note: Voice talents are of the current version only. This is the only version of the parade where all of the characters are speaking throughout the entire parade.)

The Disneyland version of the Main Street Electrical Parade was the first incarnation of the parade, premiering on June 17, 1972. This version originally featured floats with mostly flat scenes depicted in lights, the full effect of which could only be seen when the float passed directly in front of the viewer. The parade ended its run in 1974 to make way for America on Parade. A new version of the Electrical Parade appeared in 1977, featuring three-dimensional floats that could be easily seen from any angle. The parade again ended its run in 1982, and was replaced the following year with Flights of Fantasy Parade, but the Electrical Parade again returned in 1985, and ran all the way to November 25, 1996. This version was sent to the Magic Kingdom in 1999, where it ran until 2001. After its run there, the parade was moved to Disney's California Adventure, where it ran until April 2010, when it moved to the Magic Kingdom at Disney World.

The original version of the Electrical Parade shared its soundtrack with Walt Disney World's Electrical Water Pageant, which began its run on October 24, 1971, about nine months before. This version used a loop of the original Perrey & Kingsley version of "Baroque Hoedown" with a bass addition. Most of the musical sequences from this version were used in the updated version in 1977, except for the Alice in Wonderland sequence, which was updated and extended. A vinyl record was released in 1973 at Disneyland as "Main Street Electrical Parade" and at Walt Disney World as "Electrical Water Pageant.

Disney's Electrical Parade, the Disney's California Adventure version of the parade, premiered on July 3, 2001, around five months after the park's opening. It ran until April 18, 2010. This version was actually the original version the adjacent Disneyland park, which ran there from 1972 to 1996, and at the Magic Kingdom from 1999 to 2001. However, the run at Disney's California Adventure was initially actually shorter than the final Disneyland version in that the Pinocchio sequences and the Dwarf Mine sequence were omitted. On the 2008 edition of the Walt Disney World Christmas Day Parade special on ABC, it was announced that a new Tinker Bell float would be added to Disney's Electrical Parade, which would be the first new float added to the Disneyland Resort version of the parade since the temporary Mickey Mouse's 60th Birthday float was added in 1988 while the parade still ran at Disneyland. It was later announced that the Dwarf Mine and Pinocchio floats would return, as well as the classic soundtrack replaced by a new version based on that of Tokyo Disneyland's parade soundtrack. The opening voiceover was left unchanged.

In preparation for Disney's World of Color, the parade went on hiatus in April 2010, and was shipped out to the Magic Kingdom at Walt Disney World for what was originally planned as a limited run. Insider site MiceAge suggested that the parade was to be shipped back to the Disneyland Resort after the spring of 2012.[1] However, the parade now continues to run with an 'open-end' at the Magic Kingdom at Walt Disney World (see below), and there are certainly no plans for it to return to the Disneyland Resort.

The parade was sponsored by Osram Sylvania.

This version of the soundtrack borrows almost entirely from the Tokyo Disneyland Electrical Parade: DreamLights version, with the same arrangement of the Electric Fanfare and Baroque Hoedown (though continues to use the 2001 voiceover) and the Alice in Wonderland, Peter Pan, Snow White and the Seven Dwarfs, and Pete's Dragon sequences. New music was composed for the Cinderella, Pinocchio, and To Honor America sequences. While Tokyo's version does contain a Cinderella sequence, the music from that sequence was not used for the updated California version. While Tokyo's parade progresses from an electronic sound to a more orchestral sound throughout the parade, the new California version mostly maintains an electronic sound, which may explain why the Tokyo Cinderella sequence was not used. New music was composed for the Dumbo sequence, but this sequence was eventually cut from the parade.

The Tokyo Disneyland Electrical Parade (東京ディズニーランド・エレクトリカルパレード) premiered on March 9, 1985, and ran until June 21, 1995. The name change from "Main Street Electrical Parade" to "Tokyo Disneyland Electrical Parade" is due to the fact that Tokyo Disneyland does not have a Main Street, U.S.A.. Rather, it has a similarly-themed land called World Bazaar. Nor did the parade route actually go to Main Street/World Bazaar. Instead, the route wound through the park, starting around Haunted Mansion, skirting past Westernland (Tokyo's version of Frontierland), going around the Plaza area, and finally heading up past Tomorrowland. This version was similar to the American versions, albeit without the To Honor America floats, and with a new Swan Lake sequence.

The Euro Disneyland/Disneyland Paris version of the Main Street Electrical Parade premiered with the park's opening on April 12, 1992, and ran until March 23, 2003. This version was shipped from Walt Disney World's Magic Kingdom, and like the Tokyo version, was nearly identical to the American versions while omitting the To Honor America float. Newly added to this parade, but soon after removed, was the "it's a small world" float.

It was sponsored by Philips.

Unlike all other versions of the parade, whose voiceovers are in English (including the Tokyo versions), Disneyland Paris' version is almost completely in French, except for the last line.

The occasion also marked the first time the closing fanfare was used in the soundtrack. 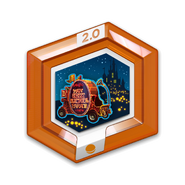 Retrieved from "https://disney.fandom.com/wiki/Main_Street_Electrical_Parade?oldid=1628382"
Community content is available under CC-BY-SA unless otherwise noted.