Being upstaged, real danger
Major Courage is a minor character from DuckTales, featured in the episode "Where No Duck Has Gone Before".

Major Courage is the main character on the TV show Courage of the Cosmos, of which Huey, Dewey, and Louie, and Doofus Drake are big fans. (The actor's real name is never given.) When the young ducks meet up with him, they are eager to make his acquaintance. However, Scrooge and Launchpad are both scornful of him both because they know everything on his show is just make believe and because they regard him as a cornball. Scrooge announces that he's going to completely renovate the show to make it more realistic. When he meets Launchpad, Courage immediately jumps to the conclusion that Scrooge is going to replace him with Launchpad. To prevent this, he decides to get on Scrooge's good side by buttering up his nephews and Doofus. On the day the renovations are finished, Courage invites the boys to come along. Launchpad comes along before Courage fires up the star ship, unaware that it's a real spaceship. Most of the time, Courage remains unaware that they really are in space and continues to think that everything that's happening is all part of his show and that the aliens are actors in costumes. He refuses to believe Launchpad when he tells him it's real even after the boys realize that Launchpad is right. When he tries to fight Overlord Bulvan, he gets his hand covered in slime, which makes him realize that Launchpad was right. Panicking over the realization, he flees to the spaceship and makes a break for it, leaving the boys behind. Scrooge makes contact with him and tells him to go back for the boys but Courage refuses. The boys escape on their own thanks to Launchpad. Scrooge punishes him by cancelling his show and putting him in charge of handing out souvenirs to kids until his contract expires. 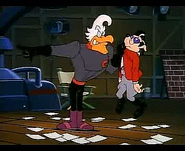 "What's the deal, Murry? You trying to make me look bad?"

Major Courage realizes that Launchpad was right about them really being in space, and panics.

Major Courage proves to be too much of a coward.

Courage’s punishment until his contract expires