Major Domo is a character from the 3-D film and theme park attraction Captain EO.

Major Domo is a robotic security officer on the ship captained by Captain EO. Another small robot, Minor Domo, fits like a module into Major Domo. He can transform into musical instruments and the other crew members begin to play the various instruments.

His name may be a pun on 'mayordomo' meaning Steward or Butler in Spanish. 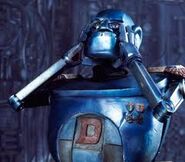 Add a photo to this gallery
Retrieved from "https://disney.fandom.com/wiki/Major_Domo?oldid=4104806"
Community content is available under CC-BY-SA unless otherwise noted.