Deceased
Minister Maketh Tua is a character from the first season of Star Wars Rebels. She is a native of the Outer-Rim planet of Lothal, trained and educated off-world. After completing her studies, she pursued a career in public service, eventually returning to Lothal to take up a post as an official of the Galactic Empire. Tua's early experiences molded her into an ardent, idealistic young Imperial patriot. She sincerely believed that the Empire offered the best future for herself and her world, and worked diligently to increase Lothal's productivity.

Despite her education and training, Tua is largely oblivious to the Empire's darker and more brutal aspects and was unprepared when an open rebellion broke out on Lothal. Tua finds herself at a loss in devising effective means to combat the insurgents and grows increasingly disillusioned and horrified by the utterly ruthless methods employed by men such as Darth Vader, Wilhuff Tarkin, and the Inquisitor. Ultimately, Tua's inability to deal with the rebels on Lothal results in fateful consequences.

In the episode "Droids in Distress", Maketh was on her way to Garel accompanied by Amda Wabo and the two droids R2-D2 and C-3PO to pick up some shipment. It is revealed here she can not understand Aqualish language and when C-3PO and R2-D2 were sent to the back along with Chopper, Sabine Wren pretended to help her translate what Amda Wabo is saying, claiming she is a Level Five Imperial Academy student.

Sabine gave her false information on where Mr. Wabo was keeping the shipment that the Rebels were going after. When she realized she was tricked, she ordered her accompanied Stormtroopers to Bay Seven where they caught the Rebels stealing their shipment of illegal T-7 Ion Disruptors in order to make some money out of them. When the Rebels escaped with the disruptors, Maketh reported the incident to Agent Kallus, who would later lead an assault on the Rebels.

In "Empire Day", Minister Tua hosted the Empire's fifteenth-anniversary celebration on Lothal with Commandant Aresko and Baron Rudor. She presented the Empire's new TIE Advanced v1 starfighter to the citizens and have Rudor the honor of taking it on its maiden voyage. However, the celebrations were ruined by the Rebels when they blew up the new fighter. Minister Tua was furious and ordered Stormtroopers to find the ones responsible. Despite insisting on having the Rebels found and punished for ruining the celebrations, Agent Kallus and The Grand Inquisitor told her their priority was still to find the Rodian known as Tseebo who accidentally downloaded half of the Empire's secrets into his cybernetic implants.

Following the ongoing failed attempts to stop the Rebels, Grand Moff Tarkin arrived on Lothal in "Call to Action" to take charge. Tua personally greeted the governor, nervously expressing her pleasure and surprise to have him on Lothal. Tarkin quickly admonished her for failing in her task to protect the Empire's industrial interest she was charged with during the absence of Arihnda Pryce, which were vital for the Empire's expansion throughout the Outer Rim, by allowing the Rebels to flourish under her nose. Tua could not manage a retort and merely choked out an awkward cough of agreement. She was not alone in this humiliation as Tarkin proceeded to mock Kallus and the Grand Inquisitor as well.

Sometime later she, Kallus, and the Inquisitor were summoned to Tarkin's office and stood at attention behind him as Commandant Aresko and Taskmaster Grint arrived. Tarkin questioned the two on their ineffective methods and consistent lack of results, going so far as to suggest their failures could undermine the security of the entire Empire. Tua looked on in horror and disgust as Tarkin had Grint and Aresko executed to serve as a grim warning to her and the others that failure would have merciless consequences from now on.

Following the incident on Mustafar, Minister Tua began to see the brutality of the Empire and was told by Darth Vader that she would be "visiting" Grand Moff Tarkin off-planet. Knowing what she may expect from when she meets Tarkin, she requested the Rebel's aid in return for some great secrets for why the Empire was on Lothal. She secretly had the rebels infiltrate the Imperial command center in Capital City while being escorted to her Shuttle. Kanan Jarrus disguised himself as a Stormtrooper Commander to get past security but was caught by Agent Kallus. Their cover blown, Tua fled to the shuttle, which had been rigged by Vader to explode. Tua was killed in the blast, and the Empire blamed the Rebels for her death.

"Ugh, where is that translator?"

"Will you please stop talking!" 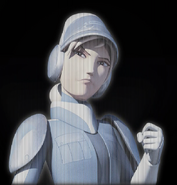