Locked away in the Museum of Cultural History

Mal's Spell Book is a book of spells that appears in the Disney Channel film, Descendants, belonging to Maleficent's daughter, Mal. It used to belong to Maleficent before she passed it onto her daughter, when she and her friends were invited to attend Auradon Prep at the request of King Beast and Queen Belle's son, Ben.

The book features a golden dragon crest on the front cover and the pages inside contain many magic spells and incantations. Mal later made "her own" by adding some green and purple paint around the dragon crest. 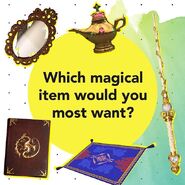