Still standing
The Malachor Sith Temple is a place that appears in the Disney XD animated series, Star Wars Rebels. It is an ancient Sith Temple and a huge pyramid located on the planet Malachor.

The Malachor Sith Temple was the hiding place of an ancient Sith Holocron, and also the hiding place off a terrifying superweapon that could only be powered by the holocron. Housed within the top of the pyramid, the weapon was fashioned from a giant Kyber crystal, and could destroy life. Seeking to prevent its use, the Jedi attacked the Malachor Sith Temple and it's inhabitants in an all-out assault, but they and the Sith defending the temple were killed when the superweapon fired upon them, turning all the combatants to petrified husks. The incident was such that all Jedi were forbidden to go near it afterwards.

Darth Maul later hid in this temple while trying to locate the Holocron. Ezra Bridger, Kanan Jarrus, and Ahsoka Tano would come to the temple seeking knowledge to combat the Sith and Inquisitors, and with Maul, managed to uncover the holocron. Maul, wanting revenge against the Empire, tricked Ezra into activating the temple's weapon with the holocron. As Ezra tried to remove the holocron, Darth Vader arrived to claim the weapon and dueled Ahsoka to the death over it. As Ezra and Kanan escaped, the temple self-destructed when its blast misfired. Though Vader escaped the rubble injured but alive, Ahsoka survived the battle too. 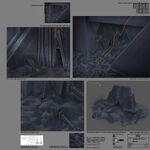