Lilly Amanda and Charles Malcolm (with Steenburgen)
Beckett Taylor, Finnian Anderson, and Seamus Hudson (with Kelley)
Malcolm John Taylor, better known by his stage name, Malcolm McDowell, is an English actor and voice actor, who is probably best known for playing Alex in Stanley Kubrick's A Clockwork Orange. Other notable roles of his include Soran in Star Trek Generations, Daniel Linderman in Heroes, and other villains in movies.

For Disney, he played the role of Austin Cloquet in the 1997 live-action comedy film, Mr. Magoo and provided the voice for Dr. Calico in the 2008 Disney animated feature film, Bolt, the Shaman in the Aladdin series, Reginald Fletcher in Phineas and Ferb, and Lord Fathom in Jake and the Never Land Pirates.

He also played the Sheriff of Nottingham in Princess of Thieves, a wizard in Just Visiting, Major Davenport in Hidalgo, and voiced Minister Veris Hydan in Star Wars Rebels.

In 1998, he played Mr. Roarke in the remake of Fantasy Island, which, like the original, aired on ABC. 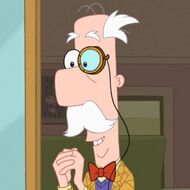 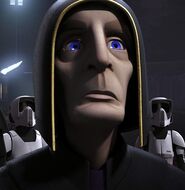 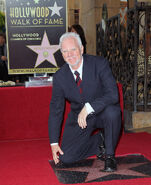