Disney Wiki
Register
Don't have an account?
Sign In
Advertisement
in: Article of the week, Objects, Article stubs,
and 12 more

This article is about the staff owned by Maleficent. For other uses, see Staff (disambiguation).

House of Mouse
Once Upon a Time
Descendants: Wicked World
Sofia the First

Maleficent's Staff is a magical golden scepter with a lime green ball on top owned and wielded by the evil fairy Maleficent. It possesses great magical power that she uses for her evil purposes.

Maleficent appears with her staff and her pet raven, Diablo, during Aurora's christening when she interrupts the celebration. Angry upon not receiving an invitation to the celebration, she uses her staff to perform her evil magic as she casts a curse on Aurora, saying that before the sun sets on her sixteenth birthday, she would prick her finger on the spindle of a spinning wheel and die (but Merryweather softens the curse so she would not die but just fall into an enchanted sleep that will only last until True Love's Kiss). When King Stefan orders the guards to arrest her, she uses her power and that of the staff to flee with Diablo. It is later used to punish her goons back at her castle in the Forbidden Mountain for failing to find Aurora. (They had been searching in cradles for sixteen years).

On the eve of Aurora's 16th birthday and back at her parents' castle, the staff is used to transform Maleficent into a will-o'-the-wisp, hypnotizing Aurora before luring her to a remote tower, where Maleficent transforms into the spinning wheel on which Aurora pricks her finger to fulfill the curse.

After Diablo is turned into stone by Merryweather during their escape from Maleficent's castle, she uses the staff to summon lightning bolts and spells aimed at Prince Phillip in order to hinder him, including a "forest of thorns". Prince Phillip is able to overcome the evil twisted thorns, so Maleficent takes her staff and leaves her castle to personally deal with him by transporting herself in front of King Stephan’s' castle, blocking his entry. She then tells him that he shall have to fight her, and "all the powers of Hell" and transforms into a huge dark dragon. Though she overwhelms Phillip, and it looks like he is about to meet his death, the Three Good Fairies transfer some of their power to his sword and so he throws the enchanted weapon into her heart, fatally wounding her. As she falls forward, she attempts to devour him, but misses, and her heavy weight causes the cliff beneath her to crumble, and she falls to her death. The staff is nowhere to be seen, and all that's left is her shredded robe, with the sword still stuck in it, which blackens.

The Staff also made an appearance in House of Mouse. It is used to punish the goons and to bop Hades and Captain Hook on their heads. It zaps Jafar during their date after he tells her that he's been searching for a Diamond in the Rough. In the film Mickey's House of Villains, during the song "It's Our House Now!", when the villains take over the House of Mouse, she uses it to transform into a fire-breathing dragon, impressing Chernabog.

The staff is present in the Kingdom Hearts series. Maleficent wields it during boss battles and carries it during cutscenes.

The staff is part of the Wicked Nine, a group of nine objects used by Disney Villains as revealed in "The Mystic Isles: The Falcon's Eye".

In the television series Once Upon a Time, Maleficent (portrayed by Kristin Bauer van Straten of True Blood fame) possesses a staff in which she hides the darkest, most vile curse imaginable, the Dark Curse. The Evil Queen, Regina, and Maleficent duel for the curse. When fire is shot at her, Maleficent uses her staff to create a shield to block her attack. Regina eventually bests Maleficent and takes her staff, only to smash the crystal orb on the floor, revealing the scroll upon which the spell is written. Maleficent warns her, however, that "all power comes with a price".

Maleficent's most shown use of it was when she was trapped within Bald Mountain. She pointed her staff at the Chernabog, though this only had limited damage on the demon.

The staff is shown to possess great power and can be used as extension of the powers she already has, as seen when Maleficent was able to use it to put the whole town of Storybrooke to sleep (though this was only temporary). She can also use the staff to shoot out purple powered beams and control fire too.

After Maleficent had her wings cut off by King Stefan, their absence made it difficult to balance. She creates the staff from a simple twig to help her walk, and later carries it to signify her position. Even when she regains her wings, she still wields it.

The staff is present in the movie Descendants. Maleficent uses it to turn into a dragon. Mal gets a chance to hold it for a fort second. There is also a replica of the staff in the hands of a manikin of Maleficent in Auradon museum.

After Maleficent's defeat in the first film the staff was later placed in the museum, and that is where a revenge seeking Audrey steals it from. The scepter slowly but surely drives Audrey increasingly insane to the point she makes classic villain mistakes. Though once separated from her, the corrupting influence of the scepter is removed along with her bitterness. Al though, no one knows how audrey touched it even though she would sleep for 100 hundered years!

The staff appears in the sequel.

The staff in Sleeping Beauty

The top of Maleficent's staff in Once Upon a Time

Maleficent holding it in Descendants

Maleficent's staff in Sofia the First 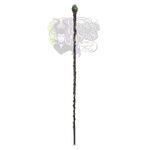 Concept for Maleficent's staff in the 2014 film