May 15, 2014
Maleficent Free Fall is an application based off the live-action film Maleficent. It was released on the App Store on May 15, 2014 and appears to take inspiration from the game Candy Crush Saga and Frozen Free Fall.

From the creators of Disney's #1 hit game Frozen Free Fall comes an all-new match 3 puzzle-adventure, Maleficent Free Fall! Inspired by Disney's epic live-action film Maleficent, you'll embark on a spectacular journey with exciting and challenging objectives like you have never seen before!

A DARK TWIST ON MATCH 3 -- Switch and slide the board of enchanted gemstones to create matches of 3 or more as you trigger cascading combos and conquer original objectives!

EVIL HAS A BEGINNING -- Begin your first chapter as young Maleficent, journey through the map to explore the untold story, unlock her raven, Diaval and discover MANY other mysterious surprises!

THE POWER OF MALEFICENT -- Cast Maleficent's green magic to instantly vanish the same color gemstones, call upon Diaval to swoop down and rearrange the board, or cast tendrils of thorns to clear entire row and columns! Unlock more unique power-ups along the way and experience Maleficent's fierce desire for revenge!

Maleficent Free Fall is free to play but some in-game items may require payment. Visit http://facebook.com/DisneyMobile for matching game tips, news and more!

Don't forget to see Disney's Maleficent, in theaters May 30 -- check your local listings for showtimes!

Power-ups are special effects that costs magic to use. Magic is earned by playing through levels.

Staff breaks tiles in a line according to the direction of the swipe. Staff costs 40 magic. Unlocked on level 32.

Raven allows you to switch any two gems. Raven costs 60 magic and is unlocked on level 47.

Wolf will reshuffle the entire board.

Dragon destroys all gems on the board. Costs 70 magic and unlocked on level 212. Similar to Olaf's Sneeze except that Dragon will clear one level from special tiles.

While the board is by default black, on some levels, all tiles must be lit by making a match over them, making dark tiles on these levels functionally identical to Frost tiles on Frozen Free Fall.

In the Moors area, they are replaced with the functionally identical Flowers.

Bottles can be filled by letting gems of the same colour fall into its top. Gem power-ups work as well. However, if the gem in question becomes part of a match, it will not count. Swapping a match-5 gem power-up (Glacier) with the required gem will still allowed the normal gem to fall into the bottle. Colored gem-power ups will count and will be triggered (the gem power-up from cross or T/L-shaped matches will only explode once).

Thorn patches can be grown by making a match next to it. It takes five matches for it to fully grow. First appears on level 63.

Stones block movement and do not move themselves. They can be destroyed by making a match of a same color, which does not need to be next to them. Only some of the stones may be active at the same time. They are different from elimination levels because while an active stone will be destroyed after 9 gems of the same color is destroyed, more gems destroyed in the same move will not carry over to the next stone 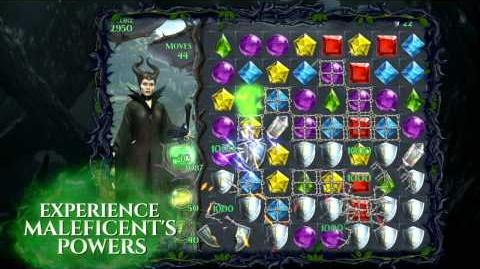