101 Dalmatians: The Series
Once Upon A Time

Anna Galvin (Once Upon a Time)
Emily Beecham (Cruella)

Everything (to an extent)

“I'm proud. Proud to have you inherit my fortune. You showed real DeVil backbone.”
―Malevola choosing Cruella as her heir

Malevola and her husband neglected Cruella when she was young, always spending Christmas away and even seemed to hint not remembering their own daughter's name. Due to this neglect, young Cruella wanted a Dalmatian puppy to give her the love and affection her father and mother never did. A buildup of neglected Christmases is what caused Cruella to go mad ("A Christmas Cruella"). Thus, if The Series was meant to somewhat share the continuity of the animated films, Malevola can be considered greatly responsible for all the misadventures. If she had not constantly mistreated Cruella, chances are she never would have snapped in the first place.

Malevola shows little love for her descendants, except for Ivy De Vil. She has two big, fierce dogs named Cerberus and Cujo. She appeared in the episode "Coup DeVil", where she called a family reunion at Villa De Vil to give the other De Vils a chance to get the Dearly Farm, and the one who succeeds would be Malevola's heir. It is revealed that the only reason Cruella wants to buy the farm is to please her mother.

After many failed attempts, Cruella snaps and stands up to her mother by lamenting about all that she hates about her. Her ranting, however, pleases Malevola, as she believes it takes some guts to stand up to one's own mother. As a result, this finally earns Cruella her mother's respect and make Malevola choose Cruella as her heir.

In this book, Cruella's mother appears in a picture with her daughter. It is mentioned that she worked as a fashion designer.

In this movie, she is named Catherine De Vil how is Estella's mother, an impoverished laundrywoman. 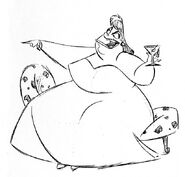 Concept art of Malevola.
Add a photo to this gallery

Retrieved from "https://disney.fandom.com/wiki/Malevola_De_Vil?oldid=4519259"
Community content is available under CC-BY-SA unless otherwise noted.