Ultimate Spider-Man
Hulk and the Agents of S.M.A.S.H.
Agents of S.H.I.E.L.D. (mentioned)
Guardians of the Galaxy (TV series)

Unknown
The Man-Thing (real name Dr. Theodore "Ted" Sallis) is a character from Marvel Comics. He is a scientist who was mutated into an empathetic swamp monster with mystical abilities.

Man-Thing appears in the Halloween special "Blade and the Howling Commandos". At first, he did not appear alongside his teammates the Howling Commandos, although he was constantly referred to as 'The Big Guy'. After the team and Spider-Man track down Dracula to his castle in Transylvania, they are swarmed by ghouls. While the situation seems completely against them, a SHIELD jet flies over, unleashing Man-Thing in the form of a green liquid mass that disintegrates any ghoul it comes into contact with. Man-Thing then reforms in front of Spider-Man's eyes to properly acquaint himself with the plant creature. Man-Thing participates in the battle against Dracula and is victorious. However, Man-Thing and the rest of the Commandos are betrayed by N'Kantu, the Living Mummy to take the cursed Ankh for himself. As N'Kantu escapes to New York now overflowing with the Ankh's power, Spider-Man gets Man-Thing to travel through the sewers, absorbing enough sewage so that he can grow to titanic size and hold off N-Kantu long enough for the other heroes to get the Ankh off N'Kantu. Once N'Kantu's powers are stripped from him, Man-Thing returns to normal size and regroups with the Howling Commandos.

Man-Thing appears along with the rest of the Howling Commandos as a guest star in the episode "Hulking Commandos". On the night of Halloween, Man-Thing teams up with the Hulks to stop Dormammu from taking control of humanity by turning everyone into Mindless Ones. During the battle, Man-Thing is also transformed into a Mindless One, but he is returned to normal after Dormammu is subdued.

In the short episode "Rocket! Groot! Man-Thing!", the Milano lands in a swamp on Earth, and while Rocket Raccoon tries to repair the ship, Man-Thing enters and attacks him. He gets into a fight with another plant-based being Groot until he is ejected and destroyed by one of Rocket's explosives. However, Man-Thing regenerates and attacks the ship again in the episode "Guardians Unite". After the Guardians escape him, they discover that Man-Thing attacked because the ship was leaking oil into the swamp. The Guardians then remove the oil to show Man-Thing they meant no ill will, and Man-Thing drops his grudge against them.

A statue dedicated to Man-Thing appears on Sakaar at Grandmaster's palace, supposedly because he was also a former champion of Grandmaster's arena battles. 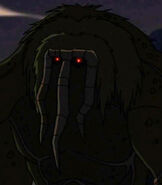 Man-Thing in Hulk: Where Monsters Dwell

Man-Thing in Guardians of the Galaxy 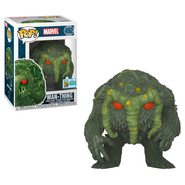