Disney Wiki
Register
Don't have an account?
Sign In
Advertisement
in: Islands, Enchanted locations, The Avengers locations,
and 12 more

Manhattan is an island in the center of New York City, New York. It is one of five boroughs in NYC, the other four being Brooklyn, Bronx, Queens, and Staten Island. Located primarily on the island of the same name at the mouth of the Hudson River, it is conterminous with New York County, an original county of the state of New York. The borough and county consist of Manhattan Island and several small adjacent islands: Roosevelt Island, Randall's Island, Wards Island, Governors Island, Liberty Island, part of Ellis Island, Mill Rock, and U Thant Island; as well as Marble Hill, a small area on the mainland bordering the Bronx. The original city of New York began at the southern end, expanded northward, and then between 1874 and 1898, annexed land from surrounding counties.

Actors/Actresses and Crew born in Manhattan 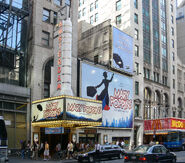 The New Amsterdam Theatre during the run of Mary Poppins (2007)