Clubs
Manotaurs are creatures who are half-bull and half-man, similar to minotaurs. The main difference is they seem to be devoted to their virility and are summoned by beef jerky. They live in the caverns of Gravity Falls which they call the "man caves". They appear in the Gravity Falls episode "Dipper vs. Manliness".

Due to high levels of testosterone, manotaurs are known to be stubborn, aggressive, and easy to disagree. They are easily offended by remarks regarding their manliness and will do anything to prove themselves worthy. They are feared by most of the animals of the forest and even by Manly Dan.

They show carelessness towards other creatures as Chutzpar uses a buck to scratch his back hair. They tend to dislike creatures who don't act manly. Their enemy is the Multi-Bear and they seem to laugh at him because he listens to BABBA. Also they apparently can smell if you have "emotional issues".

Other than their superhuman strength, manotaurs have a keen sense of smell. They are able to smell beef jerky and the emotional issues of young boys.

Chutzpar is the manotaur who first meets Dipper. He takes him to the manotaurs to become manly. He is very tall, muscular and hairy like other manotaurs and wears a loincloth around his waist. He wears his beard in a pony tail and a hat, similar to a Jewish Kippah. He has sidecurls in his hair.

Testosteraur is a manotaur who has no hair on his head. He is one of the darker colored manotaurs and has long straight horns. He also has a gold shoulder pad with a spike on his left shoulder. When Dipper questioned his manliness, Testosteraur revealed he was so tough, he had "fists for nipples". 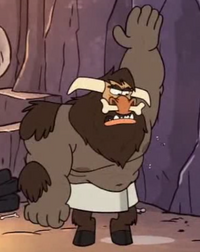 Pituitaur is a manotaur that is noticeably slightly overweight. He has horns that point downward and has a bone through his nose. He also has bushy eyebrows. 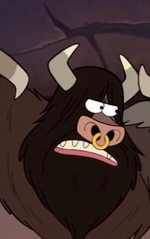 Pubertaur is a manotaur who has dark hair that covers his entire face. There is a small ring that goes through his nose. His horns are also curved upward. Unlike most manotaurs, he has no hairtufts and hair covers his shoulders and chest.

Leaderaur is the leader of the manotaurs. Leaderaur, unlike the other manotaurs, is gigantic, towering over all others. He has black fur with patches of grass on his shoulders. He is very muscular and has a long red scar on his chest. His teeth are very defined and stick out of his mouth, he has dull long horns which one is broken. He also has red eyes. Leaderaur posses peak super-human strength far beyond any other Manotaur. He has also shown the ability to breathe fire.

Beardy is a manotaur Dipper called based on his brown beard. Dipper was unsure that was his correct name, but the manotaur confirmed this.