Disney Wiki
Register
Don't have an account?
Sign In
Advertisement
in: Vehicles, The Incredibles, Transportation,
and 4 more

The Manta Jet is a specially designed transport jet resembling a manta ray. It is featured in the 2004 Disney/Pixar animated film The Incredibles.

It is a black sleek twin engine Jet, designed after a manta ray. The engine is in the rear on the plane on either side of the dorsal fin. In between the engines is a cargo door that can be used to drop “payloads”. The nose of the jet has two “Cephalic lobes” that have two turbines to help steer the jet. They also bend downwards and turn into the front landing gears. The rear landing gear lowers down from the wings of the jet. Its interior is divided into two sections; a cockpit and conference room in the back.

The cockpit has two Captain Style chairs that have two arm rests; they can also act as trays for food and beverages. The left side of the cockpit has a door that attaches to a docking port. The cockpit has a giant window widescreen in the "mouth" of the jet.

The conference room has a translucent holographic monitor at a desk like machine. The monitor is in between four chairs. The monitor is used to transmit useful information to everyone seated.

It has an automatic pilot which can fly to preset locations. The pilot will also automatically offer food and beverages. The Manta Jet is also able to travel underwater like a submarine.

Syndrome designed and built the jet using the money he made selling other weapons he designed. He and Mirage used the Jet to transport Mr. Incredible to and from their Island.

After the Omnidroid was destroyed, Syndrome took the jet to abduct Jack-Jack. As Syndrome is taking the toddler to the jet, Bob and Helen launch a rescue attempt. Jack-Jack reveals his powers of transformation, forcing Syndrome to drop him into Helen's waiting arms. Syndrome tries to escape but his cape is caught in the suction of the jet's engine, killing him and making the jet explode. The ruined jet crashes into the Parrs' home.

In Incredibles 2 it was mentioned When Helen and Bob talk about their house being destroyed by the jet when rescuing Jack-Jack from Syndrome . 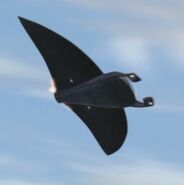