Burned down by Corey herself after returning to becoming an adventurer; later rebuilt after magic was brought back to the land of mythical creatures once again
The Manticore's Tavern is a restaurant featured in the 2020 Disney/Pixar animated feature film, Onward. It is the place where Corey the Manticore serves as its owner.

The Manticore's Tavern served as a family friendly restaurant when magic became scarce across the land of mythical creatures. The restaurant's mascot is an anthropomorphic cartoony character known as "Manticore", following a full-bodied costumed character who is also based on the mascot on the tavern. Within the tavern is a collection of memories of who the Manticore once was before she became a restaurant owner, including a map of the elusive Phoenix Gem. Visitors who ask the Manticore for the map can only get a family-friendly map as no one is allowed to touch the real map as the Manticore worked hard on finding the Phoenix Gem throughout her past adventure.

The tavern also included a Fun Zone, which is a small arcade consisting of "Gauntlet", a claw machine game with an actual gauntlet instead of a claw and "Smite-a-Knight”, a Whac-A-Mole game but with knights instead of moles.

In a plan to bring Ian's father back to life, Barley insists on the place where all the quests begin via board game Quests of Yore which is at the Manticore's Tavern, run by a restaurant owner known as The Manticore who would know where to find any rare artifact based on the ones seen in the land of mythical creatures. Planning to go the Manticore's Tavern, Barley and Ian ride on their van Guinevere and leave New Mushroomton to get to the tavern. Upon arriving, Ian and Barley enter and ask a cyclops receptionist that the elf brothers are looking for the Manticore to which a costumed Manticore appears instead. Trying to look for the real Manticore, the receptionist tells them that the real Manticore, Corey is busy doing her kitchen routine. Approaching Corey, Barley asks Corey that he and Ian are looking for a map to find the Phoenix Gem to which Corey gives one which is a kid's menu instead of a real map. Corey explains that the kid's menus are based on her old maps she collected before she became a restaurant owner to which while looking for the real map, the elf brothers see it mounted on a wall next to the Tome of Truth and Vulcan's Amulet artifacts. Taking it, Corey warns her that the map she mounted up on the wall is worthless as she refuses to give it to them. She explains that she is retired from sending adventurers on dangerous quest to which her conversation becomes interrupted when the receptionist tells her the karaoke machine is broken.

As Ian tries to talk to Corey about the plan, Corey tells her that if she plans on going on the quest, she will lose her job as a restaurant owner. Ian despondently interrupts Corey's plan to fix the karaoke machine for an unhappy band known as Squad to which while arguing, she tells her to see the portrait of her as a mighty warrior to which she feels humiliated about remembering who she once was and also looks at the quote above the portrait of her as a mighty warrior. Upset about this, Corey angrily quits her job routining the restaurant and sets the tavern on fire and to be closed for remodeling just as everyone evacuates. However, the real map burns during the fire just as Ian, Barley, and their late father escape from the burning tavern. Fortunately, the only surviving clue the brothers obtained during the fire was the kid's menu (actually done by a customer named Kayla), in which the clue is linked to the Phoenix Gem at Raven's Point.

With magic brought back to the land of mythical creatures, the Manticore's Tavern is once again reopened where Corey entertains the customers about her fight with the Curse Dragon. 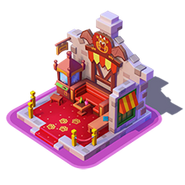 Concept art of Manticore's Tavern
Add a photo to this gallery

Retrieved from "https://disney.fandom.com/wiki/Manticore%27s_Tavern?oldid=4365091"
Community content is available under CC-BY-SA unless otherwise noted.