Empath of the Guardians of the Galaxy and Avengers

Ego the Living Planet (formerly)
Guardians of the Galaxy
Avengers

Mantis is a superheroine from Marvel Comics.

In film, she appears in Guardians of the Galaxy Vol. 2, Avengers: Infinity War, and Avengers: Endgame.

Mantis was created by Steve Englehart and Don Heck.

Mantis was raised by the living planet Ego from when she was young. As a result of being raised in isolation with Ego, she has little to no additional social interactions, and tends to be naïve, shy, and insecure.

After the Guardians crash landed on the planet of Berhert, following their escape from the Sovereign, Mantis was introduced to the team alongside Ego. During this time, she tries to befriend Drax, who finds her ugly, though she doesn't get and take offence in his insults. When the team travels to Ego's planet, the two finally bond when Drax recall how he met his wife, and lament at her and their daughter's demise.

Later, Mantis would betray Ego when she warns Drax what the former did to his own children, which Gamora and Nebula would eventually found out for themselves. Then during a three-way battle between the Guardians, the Sovereign, and Ego, Mantis uses her empathetic power to have Ego "sleep", buying the team plenty of time for Baby Groot to carry Rocket's makeshift bomb to Ego's brain. During the conflict, however, Mantis is knocked out by a destroyed Sovereign drone, and Ego wakes up to resume his attack. Drax later carries her to the surface so she can be rescued. After Ego and his planet are destroyed, Mantis would stay with the Guardians, and becomes a member of their team, as they and the other Ravagers held a funeral for Yondu.

When the Guardians pick up Thor, Mantis wakes him up with her powers on Quill's order. The team decides to separate. While Groot and Rocket accompany Thor to create a new weapon, Mantis goes to Knowhere to retrieve the Reality Stone with her remaining teammates. However, Thanos kidnaps Gamora after using the Reality Stone. Mantis goes to Titan, where she and her teammates meet Doctor Strange, Iron Man, and Spider-Man and decide to ambush Thanos and take the Infinity Gauntlet and the Infinity Stones. However, Thanos manages to take the Time Stone and goes to Earth.

Mantis is one of those individuals who are turned to dust by Thanos' snap.

Due to Bruce Banner's snap with the use of Infinity Stones, Mantis is brought back to life, along with all half of life in the universe. She appears with the other Guardians, the Avengers, and the Masters of the Mystic Arts to fight Thanos and his forces on Earth. She aids other female superheroes in helping Captain Marvel get to the Quantum Tunnel by fighting off Thanos's forces before the Mad Titan manages to destroy the Quantum Tunnel.

Mantis appears as a background character in "What If... Thor Were an Only Child?", dancing at his party.

The Guardians of the Galaxy members Gamora, Drax the Destroyer, Rocket Raccoon, and Groot encounter Mantis where she takes them through the tunnels beneath the Spartaxian Royal Palace in order to save Star-Lord. They go through various obstacles where Mantis tells them to believe. After the group frees Star-Lord, they end up in the throne room where the Cosmic Seed energy is even after a fight with the robots there and a brief fight with Emperor J'son. When Mantis claims that J'son is a tyrant, she tries to attack him only to be subdued by the Guardians of the Galaxy. While being remanded to the dungeon, Mantis still claims that J'son is a tyrant and that they will eventually believe that fact. 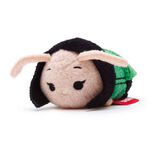