Disney Wiki
Register
Don't have an account?
Sign In
Advertisement
in: Objects, Those destroyed, Pirates of the Caribbean objects, Magical Objects

At World's End
On Stranger Tides

Four explorers of the Dark Dynasty[1]

“I've just enough time to study those infernal circles. Every route, every destination. All safe. In here.”
―Joshamee Gibbs[src]

The Mao Kun Map, sometimes referred as the Navigational Charts or the Map to the Land of the Dead, was the only guide that took into account the role of chance, fate, and the supernatural in mortal affairs. With no fixed points, the map is first introduced in Pirates of the Caribbean: At World's End and its sequel On Stranger Tides. Among other appearances, the map's paintings were used for the design of building that held The Legend of Captain Jack Sparrow attraction at Disney's Hollywood Studios.

According to the "Certificate of Autheticity" to a limited edition reproduction of the Map of the Land of the Dead:

This map was presented to the esteemed and great navigator Wu Ling for his journeys to the mysterious gates of the afterlife. The map leads to spiritual realms and legends of the land beyond death. It was compiled by the four explorers of the Dark Dynasty. It uses meridian arcs, equatorial divisions, geographic landmarks and magic keys to guide one's spiritual passage.

This reproduction has aligned the arcs showing the pathway to the Fountain of Youth. It was solely created for the Pirates Marathon on May 24th, 2007 at the El Capitan Theatre. 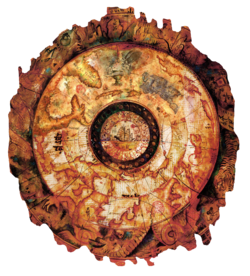 The Mao Kun Map was believed to have been painted on washi-handmade Japanese rice paper. Indeed, this map was prized above all other charts, with the directions to many marvelous places. However, as many times as the Mao Kun Map has been used, the dates and distances can change and mislead the traveler who uses the map unwisely. If lined up correctly, the map to the Fountain of Youth would be found.

The struggle for eternal life is symbolized by a tug of war between a skeleton and an angel, which is aligned with the the symbol of the Fountain itself: the Chalices.

The renowned Pirate Lord of Singapore, Sao Feng holds one of the great keys to a true pirate mystery: the charts that shows the way to World's End. To help the surviving members of Jack Sparrow's crew save Jack from Davy Jones' Locker, Captain Barbossa helps them by recovering the map. After Will Turner attempted to steal them, Feng used the charts to personally accuse Barbossa of stealing them. Although Feng didn't want Jack Sparrow return from the Land of the Dead, Will made a deal with Feng that procured Barbossa's crew the charts they need for their quest.

While sailing to the Farthest Gate, the crew used the navigational charts throughout their journey, leading them to World's End and beyond. Barbossa had the charts when they arrived in Davy Jones' Locker and joined Jack Sparrow on the Black Pearl. Jack later deciphered the chart's cryptic message, "Up is Down": to flip the ship over by sundown, so the Black Pearl, along with its crewmen, are transported to the land of the living.

Following the death of Lord Cutler Beckett, Barbossa stole the Pearl from Jack once again, with the charts in his possession. But when showing his crew the map to the Fountain of Youth, Barbossa discovered that Jack stole the middle part of the charts. Taking the route of Juan Ponce de León on the charts, Jack sailed on a small vessel to begin his quest for the Fountain.

While attempting to rescue his first mate, Joshamee Gibbs, Captain Jack Sparrow's map is seen. Gibbs takes the map and inquires of his quest to the Fountain. Taking the map back, Jack said that it was delayed but vowed to taste the waters. When Jack was brought before King George II, who wants Jack to guide an expedition to the Fountain of Youth, he was asked about the map. However, when asked to present the map, Jack didn't have it.

Unbeknownst to Jack, it was Gibbs who stole the map before Jack was dragged by Royal Guards to meet with King George. That night, after Jack's escape, Gibbs was brought forward to Hector Barbossa, now a privateer in service to King George after losing his leg and ship, the Black Pearl. Threatened into being hung by the gallows, Gibbs revealed to be in possession of the map. Barbossa ordered Gibbs to give him the map, but Gibbs burned it. Though Barbossa called Gibbs a "fool", Gibbs revealed that he had plenty of time to "study those infernal circles" and memorized every route and destination. With the knowledge that Gibbs was the only one who could help him find the Fountain, Barbossa welcomed Gibbs back into the the Navy, as the map smoldered.

The map's paintings were used for the design of building that held The Legend of Captain Jack Sparrow attraction, particularly the Fountain of Youth portion of the map. 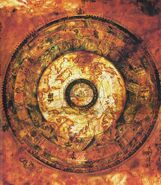 Concept art from At World's End.

Will Turner examining the charts in the Hai Peng.

"Over the Edge, Over Again" as seen in the charts.

"Sunrise Sets Flash of Green" as seen in the charts.

"Up is Down" as seen in the charts.

Jack Sparrow looking through the charts.

The map being burned. 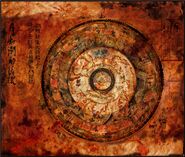 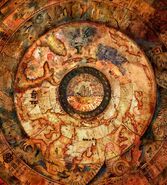 Map as seen in On Stranger Tides. 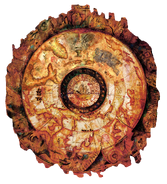