The map from Treasure Island

The map that leads to Treasure Planet once belonged to Captain Flint, and given to Jim Hawkins by Billy Bones from John Silver.

It apparently could only be opened by someone possessing a certain quality, shared by Captain Nathaniel Flint and Jim Hawkins--the latter had simply been fiddling with it and activated it by accident. The details of this quality are never explained, but seems to be something innate, since Jim is later able to open it casually.

When activated, the sphere projects a large holographic map of the whole galaxy which can be interacted like a touch-screen: once the user pushes the current location, the map moves and shows a route for the Treasure Planet. Once on the planet, it shows a green line floating in the sky which ultimately leads to the treasure.

When John Silver tried to open it, he couldn't, forcing him to bring Jim along. The Map also turned out to be a key to the very center of Treasure Planet and to the portal system Flint had used to pillage and raid ships. After B.E.N. revealed the Flint’s booby trap to blow the planet up, causing everyone to try and escape, Jim came up with the idea to hoverboard his way to the sphere and use it to relocate on another planet away from Treasure Planet in time to escape the upcoming destruction. He succeeded in doing so, and the crew was able to survive the explosion while Treasure Planet blew up in its place, most likely taking the Map along with it. 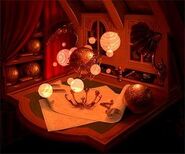 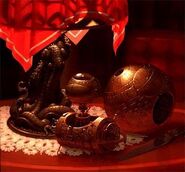 As the "Loot of a "Thousand Worlds" badges in Disney Heroes: Battle Mode