“I spent half my life fighting a shameful war. Now skedaddle before you give me any more regrets. Just remember the coordinates, okay? You gotta save them without me.”
―Mar-Vell to Carol Danvers

Mar-Vell is a Marvel Comics character. She is a Kree who invented faster-than-light travel as a means to benefit the universe. When the other Kree decided to use her invention to further the genocide of the Skrull, she realized the true evil nature of her fellow Kree and sacrificed her life to keep her invention out of the hands of the Kree.

Mar-Vell was created by Stan Lee and Gene Colan.

During the Kree-Skrull War, Mar-Vell decided to help the Skrulls in finding a new home away from the Kree's reach. She figured out a way to use the Space Stone's energy to develop a Light-Speed Engine. Learning that the Tesseract was on Earth, Mar-Vell took her pet Flerken, Goose, and arrived on Earth, disguising herself as "Wendy Lawson" and worked under Project P.E.G.A.S.U.S., while also developing her own engine. There she met Carol Danvers and Maria Rambeau who unknowingly tested the engine for her in test flights. Mar-Vell was impressed by Danvers and her skills, so she decided to take her under the wing. Mar-Vell was able to create the engine and secretly took the Tesseract away from Earth, hiding it at her laboratory. She also was approached by Talos who was desperate to find a shelter for his wife, daughter, and the Skrull civilians and Mar-Vell allowed them to hide at her laboratory as well. While testing the Light-Speed Engine with Carol Danvers, Mar-Vell was found by Yon-Rogg and Minn-Erva from the Starforce who shot the plane out of the sky. After crash-landing, Mar-Vell told Danvers the truth about who she was and her mission on Earth. She gave Danvers her Kree Pistol and insisted on destroying the energy core of the engine so that the Kree could not get it. Before she could do so, Yon-Rogg shot her in the chest, killing her. After Mar-Vell's death, Carol Danvers succeeded Mar-Vell's position on her mission of helping the Skrulls find a new place to live and help them get away from the Kree Empire. 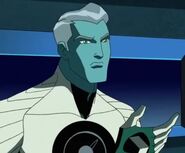