Mara had worked at Able's garage for much of her life. She specialized in working on the deadliest vehicles and weaponry on the Grid. Then Clu's forces took control of Argon City, and Mara's friend Bodhi was derrezed before her eyes by a Guard. Mara was upset but did nothing. A short time later, a new statue of Clu was destroyed by a mysterious program who, unknown to Mara, was her friend Beck in disguise. Talking about the incident with her friends at the garage, Mara expressed admiration for the program's bravery and also commented that he looked handsome, though Zed noted in exasperation that he was wearing a mask. This was the first of what would be many clashes between them about whether the Renegade was a blessing or a curse.

Later, Mara, Zed, and some of the workers were rounded up and put on Light Trains to be taken to Games. However, the Renegade with the help of one of the Guards was able to Rescue her, Zed, and everyone of them. Sometime, later Mara and Zed were at the Garage when Able asked Zed to watch over a 2nd Generator Light Cycle created by Kevin Flynn, while at the club and dancing Zed met a female program named Perl who trick Zed into bringing her into the Garage and steal the Light Cycle. Mara then help Zed go retrieve it from Perl and her gang, but were discovered. When Perl started insulting Zed and calling him "pathelic", Mara snapped and tackle Perl and told her Zed is her friend.

The duo then escaped with the Baton and then trapped them in a dead end, they managed to return it to the Garage, but Zed ends up knocking it down.

Mara is an upbeat program that enjoys dancing, music, and relaxation. She values her friends and strives to keep a cheerful attitude, but has little sympathy for programs who threaten others. She is also an excellent strategist, quick-thinking, cool under pressure, and thriving in dangerous situations. For the most part, Mara believes that the Renegade - "Tron" - is the hero the Grid needs most.

Mara is one of his staunchest followers, though she is unaware that the masked program is actually her friend Beck; she is willing to do whatever it takes to support him, and expresses annoyance at Zed's constant criticism of his methods. After an impostor's campaign to discredit the Renegade, Mara's opinion changed so far as to blame him for Able's death, but finally concluded that the city's residents couldn't expect one program to fight all their battles, a decision that prompted her to launch the first true resistance movement in Argon City. 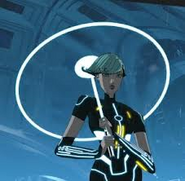