1993-2000, 2012-present
Mara Elizabeth Wilson is an American writer and former child actress. She is best known for her roles as Natalie Hillard in Mrs. Doubtfire, Susan Walker in the 1994 remake of Miracle on 34th Street, the title character in the 1996 adaptation of Matilda, and Lily in Thomas and the Magic Railroad. She is currently into stage acting and is planning to write young adult novels.

For Disney, she played Willow Johnson in Balloon Farm. She also provides the voice of Liv and Di Amara in Big Hero 6: The Series.

Liv Amara
(Big Hero 6: The Series)
Add a photo to this gallery 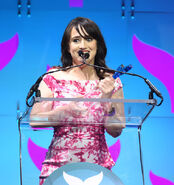 Mara Wilson speaks on stage at the 9th annual Shorty Awards in April 2017.
Add a photo to this gallery

Retrieved from "https://disney.fandom.com/wiki/Mara_Wilson?oldid=4507395"
Community content is available under CC-BY-SA unless otherwise noted.