Marceline, Missouri was the boyhood home of Walt Disney and a creative influence on him throughout his life.

Located in Linn and Charlton counties, it was founded in 1888 by the Santa Fe Railway as a stopping point for the Kansas City-Chicago route. The Santa Fe Depot currently houses the Walt Disney Hometown Museum.

The Disney family moved to a farm just outside of Marceline in 1906, when Walt was only four years old. Though they only spent a few years there, leaving in 1911, Walt would consider those years the most important in his life, citing many firsts during those years like his first school, first movie, first train ride, and more.

His earliest drawings were of farm animals around the Disney farm and those of his neighbors. One neighbor, a man named Doc Sherwood, encouraged Walt's talents and paid him for drawings of his horse. Walt's drawing habit would also land him in trouble: drawing on the walls of the farmhouse in black pitch. These years would also instill Walt with his sense of high quality showmanship. After a failed attempt at holding a "Disney Circus" in the barn where he simply dressed farm animals in costumes and charged ten cents to the neighbor kids, his audience left unimpressed and his mother made him refund the money. Walt learned that giving an audience more then they expected would always have a better response.

Walt took great pride in briefly growing up in Marceline and he would return several times after he became famous. In 1946, Walt would return for inspiration on So Dear to My Heart. In 1956, Walt and Roy would come to premiere the film The Great Locomotive Chase and dedicate the Walt Disney Municipal Pool. During this time, Walt considered buying back the old family farm and developing a living history farm attraction, which was codenamed "The Marceline Project". In 1960, Walt would dedicate an elementary school named in honor of him. This would be his last formal visit, as his declining health prevented him from coming in 1966 to dedicate the Midget Autopia attraction transplanted from Disneyland to the Walt Disney Complex park, where it operated until 1977.

Marceline continues to honor their connection with Walt Disney. In 1998, they hosted the premiere of the compilation film The Spirit of Mickey. Though Walt's vision of "The Marceline Project" never materialized, the Disney Farm is now home to the Disney Farm Arboretum and a re-construction of the barn. The Walt Disney Hometown Museum opened in 2001, chronicling Walt's early years, his return visits, and the town's railroad history. Downtown Marceline's Main Street was also officially renamed as "Main Street USA". Currently, there are plans to rebuild the Midget Autopia downtown adjacent to the museum. 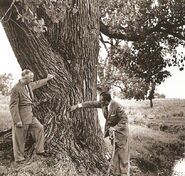 Walt and Roy Disney visiting the Dreaming Tree in 1956.

Recreation of Walt's Barn at the Walt Disney Arboretum at the Disney Family Farm.

Goofy on a sign at Walt Disney Municipal Park.

Walt Disney Municipal Park.
Add a photo to this gallery

Retrieved from "https://disney.fandom.com/wiki/Marceline,_Missouri?oldid=3783938"
Community content is available under CC-BY-SA unless otherwise noted.