Elizabeth Collector
Marcia Ann Strassman was an American actress, television personality, and singer, best known for her only Disney role as Diane Szalinski in Honey, I Shrunk the Kids and Honey, I Blew Up the Kid. In 1994, she reprised her role from those movies in the 3-D film spin-off Honey, I Shrunk the Audience. In March 2007, Strassman was diagnosed with advanced breast cancer that had spread to her bones. She died of the disease at her home in Sherman Oaks, California, on October 24, 2014. She was 66 years old, and is survived by her sister, Julie, her brother, Steven, and her daughter, Elizabeth Collector. 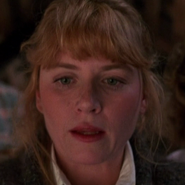 Diane Szalinski
(Honey, I Shrunk the Kids)
(Honey, I Blew Up the Kid)

Add a photo to this gallery
Retrieved from "https://disney.fandom.com/wiki/Marcia_Strassman?oldid=4031204"
Community content is available under CC-BY-SA unless otherwise noted.