To get rid of and destroy Adam, Bree, and Chase. (failed)
To kill Daniel (failed)

Marcus Davenport (portrayed by Mateus Ward) is a main antagonist and a recurring character of Disney XD's series Lab Rats.

He seems to be kind, harmless, but his friendly act of innocence doesn't fool Leo Dooley. He revealed himself to be a truly dark and mean character who is ruthless and manipulative for a reason, and will not let Leo to mess up his plans and stop at nothing to achieve his goals. Despite this he creates a believable facade of being a friend. He only reveals his true personality to Leo. 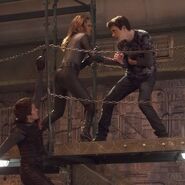 Add a photo to this gallery
Retrieved from "https://disney.fandom.com/wiki/Marcus_Davenport?oldid=4138487"
Community content is available under CC-BY-SA unless otherwise noted.