2 (with Gower)
Marjorie Celeste "Marge" Champion (née Belcher) was an American dancer, choreographer, and actress, most well-known for being the live-action reference model for Snow White in Snow White and the Seven Dwarfs, the Blue Fairy in Pinocchio, and the Dancing Hippo in Fantasia.

Champion was born in Los Angeles, California, on September 2, 1919. Her father, Ernest, was a Hollywood dance director who taught Shirley Temple, Betty Grable, Ramon Novarro, Cyd Charisse, Fay Wray, and Joan Crawford, as well as Champion's future husband Gower Champion. She began dancing at an early age and studied exclusively with her father from age five until she left for New York. In 1930, she made her debut in the Hollywood Bowl at age 11 in the ballet "Carnival in Venice". By age twelve, she became a ballet instructor at her father's studio and graduated from Hollywood High School.

She would appear in various films like The Story of Vernon and Irene Castle, Till the Clouds Roll By, Show Boat (1951), Everything I Have Is Yours, Mr. Music, Give a Girl a Break, Jupiter's Darling, Three for the Show, Lovely to Look At, The Swimmer, and The Party. During the summer of 1957, her and her husband had their own TV series, The Marge and Gower Champion Show, a situation comedy with song and dance numbers and she served as a dialogue and movement coach for the TV miniseries, The Awakening Land as well offer workshops and related liturgical arts programs throughout the country.

Champion also appeared in several stage musicals and plays on Broadway as a performer in shows like What's Up, Dark of the Moon, Beggar's Holiday, 3 for Tonight, and Follies. She also worked as a choreographer or assistant for shows like Lend an Ear (1948), Make a Wish (1951), Hello, Dolly! (1964), and Stepping Out (1987).

She was honored with the Disney Legends Award in 2007. and was inducted into the National Museum of Dance's Mr. & Mrs. Cornelius Vanderbilt Whitney Hall of Fame in 2009. In 2013, Champion received The Douglas Watt Lifetime Achievement Award at the Fred and Adele Astaire Awards ceremonies. She died on October 21, 2020, at her son's home in Los Angeles. She was 101.

She was hired by Disney as a dance model for Snow White and the Seven Dwarfs. Her movements were copied to enhance the realism of the animated Snow White figure and even served as model while wrapped in a baggy overcoat for two dwarfs at once, when for the "Silly Song" dance. When working onSnow White, Champion recalls, "the animators couldn't take a young girl out of themselves, they couldn't take the prince out of themselves". She later modeled for characters in Pinocchio, Fantasia for "Dance of the Hours" which she also helped choreograph, and Dumbo where she modeled for Mr. Stork.

(Snow White and the Seven Dwarfs) 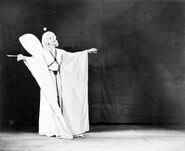 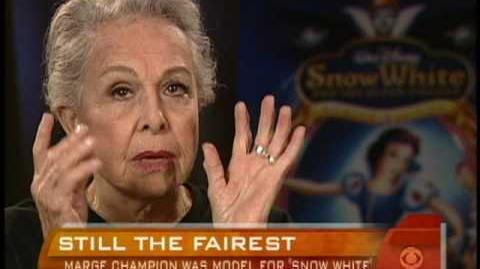