Jackson
Maria Elena Bello is an American actress and singer. She is well known for her role as Jacqueline "Jack" Sloane in CBS crime drama series NCIS since 2017. She also played as Evelyn 'Evy' O'Connell née Carnahan (replacing Rachel Weisz) in The Mummy: Tomb of the Dragon Emperor. She also played Sally Lamonsoff in the Grown Ups film series.

Maria Bello at the 25th Independent Spirit Awards in March 2010.

Maria Bello speaks at the Goliath panel at the 2016 Summer TCA Tour. 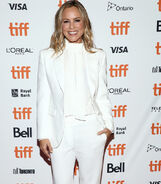 Maria Bello attending the 2018 Toronto International Film Fest.
Add a photo to this gallery
Retrieved from "https://disney.fandom.com/wiki/Maria_Bello?oldid=4016722"
Community content is available under CC-BY-SA unless otherwise noted.