Home on the Range (deleted)

Good
Mariachi Butterflies are characters that were ultimately cut in the film Home on the Range. They would have sung "Heroes, Villains and Cows", but as a result, they were deleted, losing the aforementioned song that was also deleted.

Mariachi Butterflies are monarch butterflies wearing Mexican-styled clothes as well as sombreros. They also have moustaches. One of the them is tall, while the others are medium-sized and short.

Like all Mexican music-players, they love singing and playing their guitars.

During development of Home on the Range, the Mariachi Butterflies were added to narrate the opening of the film and "Heroes, Villains and Cows" not only introduces them, but also shown as the film's intro. As co-director Will Finn stated, despite their funny personalities, the characters were deleted in the final version of the film, alongside the song they sing, because they were considered too cumbersome to keep in the final version. Animation tests of them can be found in the deleted "Heroes, Villains and Cows" scene. 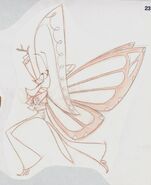 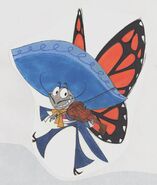 Retrieved from "https://disney.fandom.com/wiki/Mariachi_Butterflies?oldid=4225137"
Community content is available under CC-BY-SA unless otherwise noted.