Michael Lamper (m. 1992)
Marina Sirtis is an English-American actress best known for her role as Counselor Deanna Troi on the television series Star Trek: The Next Generation and the four feature films that followed, as well as other appearances in the Star Trek franchise.

For Disney, she voiced Demona and Margot from the animated series Gargoyles and played Sonya Amin in the ABC TV show, Grey's Anatomy. 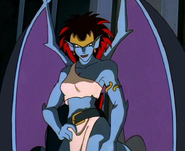 Demona
(Gargoyles)
Add a photo to this gallery
Retrieved from "https://disney.fandom.com/wiki/Marina_Sirtis?oldid=3990343"
Community content is available under CC-BY-SA unless otherwise noted.