Disney Wiki
Register
Don't have an account?
Sign In
Advertisement
in: People, Actors, Around the World in 80 Days,
and 7 more

Ruby, Charlie, and Oscar
Mark Ian Addy is an English actor. He is best known for his roles as Dave Horsefall in The Full Monty and Fred Flintstone from The Flintstones in Viva Rock Vegas, Roland in A Knight's Tale, Bill Miller in the US sitcom Still Standing, and Robert Baratheon in Game of Thrones.

For Disney, he played the role of the Steamer Captain in Disney's 2004 live-action movie, Around the World in 80 Days. He also voiced Clyde the Horse in 2018 fantasy Mary Poppins Returns.

Steamer Captain
(Around the World in 80 Days) 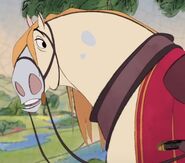 Mark Addy speaks at the Atlantis panel at the 2013 Summer TCA Tour.
Community content is available under CC-BY-SA unless otherwise noted.
Advertisement