Founder and CEO of Waddle

Being unnoticed, getting his coffee early, old people without online social profiles, losing his phones, being humiliated online, anyone else being more popular than him, glazed donuts

Unnamed father
Emma Glamour (mother)
Marcus "Mark" Beaks is one of the recurring antagonists in the DuckTales reboot. He is the founder and CEO of Waddle, a tech company located in the neighborhood of Silverbeak.

Despite being a laidback tech industry billionaire, Mark Beaks is a greedy and rapacious person who does not care about hard work as he cares about money, his status, being buzzworthy, and how many followers he has on social media. He is also an egocentric, immature and self-centered attention-seeker, and can be very selfish such as trying to steal his mother Emma Glamour's phone. He lacks any creativity and usually resorts to stealing original ideas and passing them off as his own. However, he is pretty much a childish crybaby and a coward.

Beaks made his debut in the episode "The Infernal Internship of Mark Beaks!", where Huey and Dewey compete with each other for a coveted internship at Beaks' company, Waddle. Meanwhile, Scrooge and Glomgold decide to team up to take Beaks down as their new competitor. It's revealed that his big project was a fraud so he could be rich as a result of the hype and attention of the project. Later on, he is grabbed by Falcon Graves, whom Beaks hired to "steal" the secrets of the project, who angrily attempts to toss him off the roof of the company headquarters upon realizing the project was a fraud, though Beaks survives thanks to a small trampoline that was situated beneath him.

Beaks' next major appearance, "Beware the B.U.D.D.Y. System!", portrays him as an indirect antagonist, where he introduces a self-driving robot named B.U.D.D.Y. that Scrooge almost decides to buy. Beaks' product threatens both Launchpad McQuack and Gyro Gearloose that the two try to prove it is flawed. It is revealed that Beaks' robot is actually a Lil Bulb replica Beaks made using online blueprints from Fenton Crackshell-Cabrera, which gets Fenton fired by Gyro. However, Beaks only improved B.U.D.D.Y.'s appearance but not the robot's previous flaws, thus Beaks belittling B.U.D.D.Y. causes the robot to turn against him. After Gizmoduck rescues Beaks, Beaks is left awe-struck by the superhero's debut; at the end of the episode, Beaks ominously decides that he must have Gizmoduck as his own.

Beaks' appears in "McMystery at McDuck Manor!", where he is invited to McDuck Manor for Scrooge's birthday party. He takes advantage of the party to hack into Scrooge's security cameras and find embarrassing footage of Scrooge to post on the internet. He is ultimately escorted out of the mansion by Duckworth's ghost.

His next major appearance is in "Who is Gizmoduck?!", where he serves as the episode's main antagonist. Beaks steps into the full-villain circle when he is first seen in his office obsessing over Gizmoduck. His helicopter is accidentally blown up by Gizmoduck, who saves him. He offers to hire Gizmoduck, who refuses at first, but accepts the offer after Gyro fires him. He then forces Fenton to only respond to emergencies that have to do with people who have an app that calls him, and says if he refuses to answer a call, his suit will short out. After Beaks' actions impede him from stopping a mugging, Fenton decides to quit, but Beaks steals the suit for himself and plans to pass himself off as "Waddleduck 2.0". Fenton warns him the suit is dangerous, but Beaks doesn't listen and harshly calls him "Chico." At the demo, he inadvertently overloads the suit and nearly gets everyone there killed. Fenton regains the suit and saves everyone by getting the unstable core far away. However, the suit gets destroyed in the process. In the end, his office gets wrecked and Beaks is last seen sitting in an ambulance with a sad expression on his face.

He returns in "The Dangerous Chemistry of Gandra Dee!", employing Gandra Dee to learn Gizmoduck's passcode for his Gizmosuit. Beaks drinks some of the Nano serum during his boredom, then raids the lab slipping past the defense turrets. After breaking in, he has recorded Gizmoduck's catchphrase and grows his muscle mass, having drank an overdose of Nano serum, and calls himself Mega Beaks.

In "Happy Birthday, Doofus Drake!", he attempts to gain Doofus Drake's favor at his birthday party with a "son" named B.O.Y.D., whom Louie soon discovers is really a robot. He then exposes Beaks' plot, leading to Doofus to send Beaks into his honey bin.

His next appearance is in "GlomTales!" when he joins forces with Glomgold and the rest of Scrooge's enemies to defeat him and his family. Mark was supposed to fight Gyro since they both specialize in technology, but he isn't present, so he ends up fighting Launchpad instead, and immediately chickens out. When Glomgold revealed that he planned to double-cross the other bad guys after winning the bet and ended up losing it all to Louie, Mark tried to use his face-punch app on him, only to get punched himself due to it being on selfie mode.

In the last episode of the second season, Moonvasion!, he's seen taking selfies with the Moonlanders before he's taken prisoner by them.

Beaks returns in "Louie's Eleven!", having once again anonymously hired Falcon Graves to steal the phone of Emma Glamour, his mother, which is the key to her entire company, for the selfish purpose of putting himself on his mother's "it" list. He and Graves briefly fight over the phone before being distracted by Dewey with a yo-yo performance. As this impressed Glamour, an exasperated Beaks began resuming his fight over her phone before an irritated Graves declared his intent to kill them both, only for Donald Duck and Daisy Duck to come crashing in on him. While Graves is taken into custody and the party returns to full swing, Beaks is forced to miserably sit by his mother as punishment.

Mark Beaks makes a brief cameo in the episode "Astro B.O.Y.D.!" when Gyro and Huey are viewing B.O.Y.D's memories with previous owners. It is revealed that Beaks found him while searching through wreckage to steal whatever he can to claim he invented it himself and increase his wealth. After finding him and being told that his name is 2-BO, Marks doesn't like the name and decides on the spot to rename him B.O.Y.D, short for "Beaks Optimistic Youth Droid". Delighted to be given a real name, B.O.Y.D. offers to give him a hug to thank him, but Beaks refuses since he doesn't like touching and claims he smells like garbage before putting him in his shopping cart along with other pieces of technology he's taking.

In "Beaks in the Shell!", Beaks is starting to have his popularity and reputation tanking as well as running out of ideas, with a reporter calling his attempt to steal Gizmoduck's armor as "sad". He then resolves to steal it by breaking into Fenton's house, and hacks into GizmoCloud after overhearing a frustrated Huey, who is oblivious to his presence, explaining it. Huey, Fenton, Gandra, Gyro and M'Ma Crackshell try to stop him but he keeps stealing aspects of their suits, putting them at a disadvantage. However, they later outwit him by mocking him for being a big head who only steals and has no original ideas, which causes him to become a literal big head, allowing them to kick him out of GizmoCloud for good.

"Welcome to Waddle, where imagination and innovation get married and have babies!"

Mark Beaks and his robot son at Lester's Possum Park. 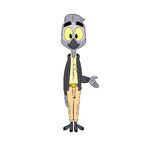