Mark Ware Isham is an American composer, songwriter, and musician. He has composed for numerous films, such as The Hitcher, Varsity Blues, Blade, and The Black Dahlia, Dolphin Tale, and The Lucky One. He also wrote music for TV shows like Crash and Family Law.

Isham's Disney compositions include Miracle, Eight Below, Invincible and Togo. He also wrote music for ABC's fantasy drama series Once Upon a Time and Marvel/Freeform's Cloak & Dagger. 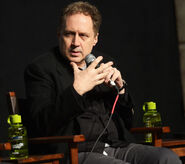 Mark Isham attending the 2018 San Diego Comic Con.
Add a photo to this gallery
Retrieved from "https://disney.fandom.com/wiki/Mark_Isham?oldid=3926061"
Community content is available under CC-BY-SA unless otherwise noted.