Morgane (2012-present)
Mark Daniel Walton is an American storyboard artist, writer, and voice actor, who works for Disney. He has provided voices for some of the characters in recent movies, including Barry and Bob the Texas longhorns in Home on the Range, Goosey Loosey in Chicken Little, and Rhino in the Bolt franchise. He is credited as a writer on Tarzan and the animated short, The Little Matchgirl. He is also credited as a storyboard artist on Home on the Range, and as a story artist for Chicken Little and Meet the Robinsons.

Barry and Bob
(Home on the Range) 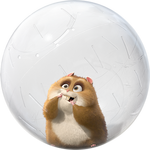 Rhino
(Bolt)
Add a photo to this gallery

Walton behind the scenes of Bolt. 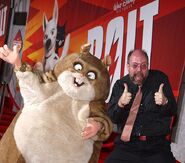 Mark Walton with Rhino at Bolt premiere in November 2008.
Add a photo to this gallery

Retrieved from "https://disney.fandom.com/wiki/Mark_Walton?oldid=4431223"
Community content is available under CC-BY-SA unless otherwise noted.