Bad
Marta Balatico (portrayed by Leslie-Anne Huff) is the actress who portrays Penelope in the hit tween drama Mackenzie Falls.

She was partnered with Nico in the episode "The Legend of Candy Face". Like the rest of her castmates, Marta despises So Random!. But in "Sonny With a Secret," she's revealed to despise Sonny the most for dating her crush, Chad. Nico is showed to have a crush on Marta, but she doesn't like him. She always tells Nico that she is way out of his league. But he doesn't stop flirting with her. Marta is highly cunning and crafty, for she devised a way to get Sonny kicked off of So Random!. By sending Sonny a hate cake which read "Sonny Munroe is a Phony" and making it seem like she stole a necklace from the mall, Nico and Grady's golden coin, and the character Sicky Vicky, Marta was able to get her fired. Marta even seems willing to kill for her desires, because she replaced Sonny's cheese ball with a bomb that would explode when Sonny fired it from the cheese cannon. She also trapped Chad, Nico, Grady, and Zora on an airplane that was about to crash. She was willing to let Chad escape the plane with her, but only if Chad would date her. When he refused, she jumped off the plane and took the only parachutes with her, without seeming to feel any guilt.

In the end, she was caught by Tawni and arrested for her misdeeds. Currently, she's off of MacKenzie Falls, and serving jail time. It unknown if she is to return to MacKenzie Falls.

Marta getting annoyed at Nico in "The Legend of Candyface" 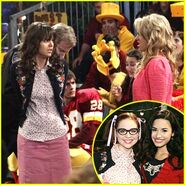 Retrieved from "https://disney.fandom.com/wiki/Marta_Balatico?oldid=3773268"
Community content is available under CC-BY-SA unless otherwise noted.