1981–present
Martha Campbell Plimpton is an American film and stage actress, voice actress, singer, and model. She is well known for her roles in films, such as Stef Steinbrenner in 1985's The Goonies, Julie Buckman in 1989's Parenthood, the title character in the 1991 film, Samantha, and Jan in the 1996 comedy Beautiful Girls. She also played Virginia Chance in the Fox sitcom Raising Hope.

She is the daughter of actor Keith Carradine.

For Disney, she played Eileen O'Neal in the ABC sitcom The Real O'Neals and voiced Yelana in the Disney animated sequel Frozen II. 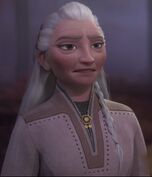 Yelana
(Frozen II)
Add a photo to this gallery

Martha Plimpton speaks at The Real O'Neals panel at the 2016 Winter TCA Tour.

Martha Plimpton at premiere of Frozen II in November 2019.
Add a photo to this gallery
Retrieved from "https://disney.fandom.com/wiki/Martha_Plimpton?oldid=3902145"
Community content is available under CC-BY-SA unless otherwise noted.